Seven minutes before race time Sam Hatton runs up to the coach and says, “Hey Coach, there are only five of us at the starting line. The rest must have gone to the wrong spot.” Definitely not the news a coach wants to hear on a day where over 2,000 cross country runners converged to race. The parking lot of Heritage High School was jam-packed with runners, spectators, busses and cars. It was hard to find the 30-foot-long line drawn on the pavement signaling the start of one of the premier races in Colorado. College coaches use these results to consider their crop of prospects for the early-signing scholarships offered in October. Teams came from New Mexico, Wyoming and Nebraska to race in the Liberty Bell Invite. 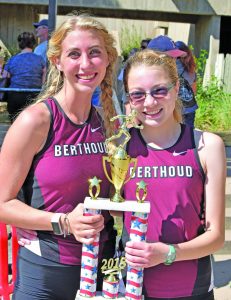 The runners were separated into four divisions of approximately 20 teams in each. Berthoud was in the Division Three race which allowed unlimited entries per team, making it the largest race of the day. At 9:45 a.m., all of Berthoud’s boys had arrived and were crowded into a single-file line, 23 runners deep, with senior Kade Leonard leadingthe charge. Only three senior boys, Leonard, Siler Stein and Sam Hatton had raced at Liberty Bell as freshmen. The team has attended another meet in Lyons for the past two years, but it was decided the time was right to attend Liberty Bell again. Liberty Bell is not for the faint-hearted. The races are extremely fast and competitive. Leonard took a full minute off of his time just from last week, running 17:24 and finishing seventh overall. Stein and Hatton improved over four minutes from their freshmen times, running 18:07 and 18:29 for 29th and 42nd places, respectively.

The top-five Spartans were separated by only 62 seconds. Eli Greenslit was 15th in 17:35, Kyle Conlon ran 17:47 for 21st and Lane Pirkey was the fifth scorer in 18:25 for 38th place. University High School won the team scoring with 94 points; Berthoud had 107 points for second and Peyton High School was third with 120 points. Berthoud will have to compete with University later this season to earn a spot to the state meet.

The girls race started three minutes after the start of the boys race, running the same course as the boys. Berthoud’s Cailey Archer and Ellie Sundheim began passing boys before the mile mark, making maneuvering through the course and keeping track of places a little tricky. The last time Archer was on this course, she ran 26:20. This time, the senior ran 20:50 for 13th place. Sundheim was close in 20:53 for 14th place. Ally Padilla was 24th in 21:46 and Julianne Evans Dennison was 38th in 22:13.

With one more runner to finish, Berthoud’s girls were in fourth place in the team scoring. Freshman Elliana von Seggern was racing with two girls from Skyview Academy and one from Basalt. A sprint to the finish would determine the second- through fourth-place team placing. Finding one more gear, the freshman pumped her arms up the final hill to the finish ahead of all three competitors in 22:22 for 40th place and helped the Lady Spartans secure the second-place trophy. Alex Schultz was close behind in 22:30 in 45th place, beating Skyview’s sixth runner. Moffat County won the team title with 59 points, Berthoud had 118 for second, Skyview Academy was third with 120 points, and Basalt went home without a trophy.

The Spartans will be racing closer to home next Friday at the John Martin Invitational at Ft. Collins High School. Turner Middle School will be attending the race as well. So far, Turner’s boys team is undefeated, with eighth grader Wyatt Schmidle leading the charge.