The best way to conclude a season in any sport is with a win. Whether that season concludes in the championship game or, as it did for the Berthoud High School soccer team last Wednesday at Max Marr Stadium, in the regular season finale, ending it all by notching one in the ‘W’ column is the always best way to go out.

Berthoud took to the pitch in their final match of 2021 against Loveland Classical – a more than decent squad that entered with a 10-3 record and will play in the 2A state tournament that begins this week – wanting to send the seniors out with a win.

And they delivered. Berthoud took command early in the match and led throughout, ultimately winning by a 5-2 final tally.

Even with the emotional boost provided by the seniors’ final match, Berthoud Head Coach Zac Traver explained that the win was the result of the Spartans executing the game plan as designed and not relenting throughout the 80 minutes of play.

“You have to slow it down to go fast … we started going way too fast, we started pushing everyone up, everyone got excited thinking they’re going to score, so we said slow it down because if you get ahead of yourself, you’ll run yourself out a scoring opportunity,” Traver explained. “Once we started passing the ball around, and Loveland Classical played a heck of a game, but they started to falter when started making really good passes and they would open up, and once they opened up we made good passes and sent the boys to the net.” 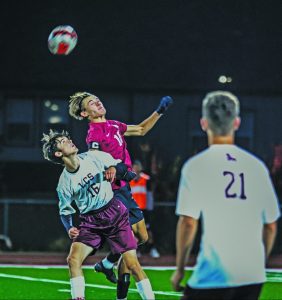 Photo by ACP Media – Berthoud’s Ricky Coke goes up for a header against the Loveland Classical player in last Wednesday’s season finale. Berthoud ended the year with a 5-2 win to send the senior class out with a bang.

Berthoud scored three goals in the first half, one on a penalty kick from senior forward Rikky Coke and added two more in the second. The Spartans took the lead early with two goals in the opening minutes, one from Coke and the first one of the night coming off the foot of senior Bryant Root. Even with the early lead, Berthoud kept threatening, two more shots missed by slim margins as Berthoud put Loveland Classical on their heels.

On the other end of the pitch, goalkeeper Kellen Marks was on his game; the senior did not allow a goal and made seven saves before relinquishing his spot in the box to freshman Kodiak Byron. The shutout was Marks’ second of the season.

“I think it’s just a lot of hard work paying off, we had a rough season with injuries, we had a lot of potential but the season kind of derailed with injuries, but we put together some solid performances with ups and downs and ending on an up is big,” said Coke, whose hat-trick provided three of the Spartans’ five goals on the night. “One of the biggest things I’ve learned from high school soccer is confidence is huge, you have the skill, but if you don’t have the confidence you can get in your head and that’s where your performance drops and the confidence from a win like this, with all the supporters out, this was big not just for us as seniors but for this whole program going forward, you don’t think it carries over but it does.”

“The seniors really took it to the field tonight, I was really proud of them, and moving forward, I think they taught our younger guys an awful lot, I feel pretty confident in what our team for the future and these seniors are some of the best players I’ve ever coached and it’s sad to lose them but what they left, their legacy they left for the younger kids, really makes me proud,” said Berthoud Head Coach Zac Traver.

Root scored the first goal of the match and set the tone for the Spartans. “On that first goal, I just sent it out, I saw the net was open and just put it up and it went it and thought ‘sweet, that’s a good way to start the game,’” he said.

Having recovered from a broken nose that cost him four matches this fall, Root said it was important for both himself personally and his teammates to end the year positively. “It was just nice to get back out there, the week I was out with the broken nose was hard and I just wanted to get back out there, and it was great to finish the year the way we did,” he said. “It’s awesome, I think every senior wanted to end with the win, I know these guys wanted to go out with a bang, the past couple games had been rough, and we wanted to get as many goals as we could.”

Berthoud suffered multiple injuries throughout the season and as such were left bereft of several key players during a particularly brutal portion of their schedule midseason. Asked if he was pleased with the season as a whole, Traver replied, “Yes, the most wins we’ve had, most goals we’ve had by far, I think we could have won more, could have played better, if you look at some of our games, we had some losses but we had some games where we only had two subs and that killed us. The thing is, the boys played so hard in those games but they just ran out of gas, and it’s soccer, you’re going to run out of gas when you only have a few subs.”

Coke finished the year with 30 points thanks to 13 goals and four assists, all team highs and the former two placed him seventh in the Longs Peak League. Senior Jonah Wyant turned in a stellar campaign as well this fall, scoring five goals and adding an assist while junior Kaleb Johnson scored four goals and added four assists to finish second on the team to Coke with 12 points.

Coke credits his success to his hard work but also to his support system. Speaking eloquently, the senior explained, “I owe my success to a, my parents, and b, to my coaches and my teammates. My parents have been my biggest supporters through all my time playing, getting me to every game, every practice and without them I wouldn’t be who I am. My teammates, they help me be better, they show up every day, I try to do the same being a captain and my coaches, they push us every day to get better, this is one of the closest groups of guys I’ve been around and it’ll be sad to go.”