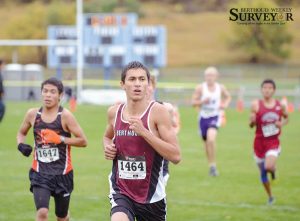 Berthoud’s Elijah Grewal keep a steady pace at the 4A Region 4 Cross Country Championships in Lyons on Oct. 22. Despite the rainy conditions, Grewal said it was perfect conditions for a race. The BHS senior finished in 17 minutes, 12 seconds, good enough for 10th place and a ticket to the 4A State Cross Country Championships in Colorado Springs Saturday.
John Gardner / The Surveyor

When last week’s rain soaked all of the fields and trails; football, softball and soccer games were postponed. However, cross country is not like other sports. Only lightning delays a cross country race and, when that happens, the teams just wait until it moves out of the area. Rains, snow, sleet, extreme heat, extreme cold… all are considered, “running weather.”

Starting out at the 4a Region 4 Cross Country Championships at Lyons High School on Oct. 22, Berthoud senior team captain Elijah Grewal started out with a pretty quick pace.

“Starting out, I thought we were going out pretty fast,” he said.

It wasn’t until nearing the end of the second lap that it hit him: there was another lap to go.

“I was like: Ok, you’ve got to hold on to this spot,” Grewal said. “You can’t drop and you’ve just got to keep on going at the same pace because you’ve got yourself in a spot where didn’t think this through.”

Grewal kept up the pace and ended up finishing in 10th place with a time 17 minutes, 12 seconds, which was also a new personal record for Grewal.

“I had to tough it out,” he said. “You know? This could be the last race of my senior year, so I didn’t want to do that. I want one more.”

Grewal, who’s raced at state the past two seasons, had his sights set on one more year at state to cap off his high school career.

“I’m not going home today,” he said. “I wanted to go to state my senior year.”

Coming into the meet ranked No. 14, and knowing the top 15 individuals qualify, added to the stress for the senior. As soon as the gun went off, Grewal settled into the lead pack and stayed with the group through the next three miles. Fourth place through 11th place were separated by a mere eight seconds. Grewal will race at the state meet at the Norris Penrose Event Center in Colorado Springs at 10:30 a.m. on Oct. 31.

It’s something that Grewal was extremely happy about.

“It’s the greatest feeling I’ve ever had competing, especially being my senior year,” he said. “It’s a great feeling.”

Junior Josh Doyle finished in 45th place with a time of 18:35. Sophomore Murphy Zimmerling caught up to teammate Kade Leonard after the second mile. Zimmerling encouraged Leonard throughout the final mile, keeping the freshman from falling off pace. Zimmerling had a strong kick to the finish line, finishing in 61st place at 19:28; Leonard placed 63rd in 19:32. Gabe Ramirez (70th), Noah Burtis (80th), and Kevin Sethre (84th) rounded out the placing for Berthoud. These three sophomores ran 19:44, 20:01, and 20:10 respectively.

Berthoud’s girls team placed 10th, led by senior captain Sonya Schuppan’s fastest time of the season (22:55) and finishing in 49th place. Sophomore Maycee White kept close to Schuppan finishing in 57th place with a time of 23:19. Freshman Kathryn Mathiesen sprinted past four competitors in the final meters of the race to complete the 5K course in 24:17 for 73rd place. Cailey Archer has improved her time every single week this season. She capped off the streak with another personal best time of 24:34 for 81st place. Alyssa Radloff slipped and fell in the mud, hurting her knee. The sophomore continued to fight through the pain to place 83rd with a time of 24:57.

On Friday afternoon the junior varsity team raced on the same course. Senior Collin Pea and sophomore Tyler Williams raced through the first half of the race with two runners from Silver Creek before falling back a little. Pea continued to race in third for another mile until overcome by a Longmont runner. Pea finished in fourth place at 20:37 and Williams was sixth at 20:40. Official places were not recorded, though.

– John Gardner contributed to this report