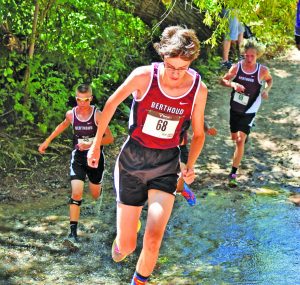 Kevin Sethre splashed through the final water crossing at the Cheyenne stampede. Lane Pirkey and Siler Stein follow close behind. The meet was an opportunity for the Spartans to race on the course where the state championship will be held in October.

It was hot. It was dry. It was a tough course. But the Berthoud High School (BHS) cross country team didn’t back away from the competition at the Cheyenne Mountain Stampede meet in Colorado Springs on Friday. Maycee White led the girls team to a sixth-place finish out of 17 complete teams. White placed 19th overall against 113 other girls. Cailey Archer and Alyssa Radloff were next to one another in the early part of the race, running in the top 50. Archer continued to pick off athletes and finished in 40th place. Radloff faded and finished in 68th.

Freshmen Ellie Sundheim and Genevieve Babyak were impressive in their first race in a Spartan uniform. Sundheim finished in 46th place and Babyak was 63rd. Alex Schultz ran a consistent race and placed 57th. Liz Bosnich was the final scorer in 70th place. Holy Family won the varsity girls competition with Alamosa and Colorado Academy, taking second and third on the medal stand, respectively.

The temperature continued to climb throughout the morning of racing, but it didn’t seem to bother seniors Noah Burtis and Kevin Sethre, who ran over a minute faster than they had at this meet last year. Burtis finished in 27th place after starting near 50th place. Sethre was 66th place. The first Spartan across the line was Kade Leonard who finished in 18th place. Leonard didn’t have the opportunity to run this course last year due to injury. Kyle Conlon had a tremendous race placing 48th in his first ever cross country race. Lane Pirkey was the second-fastest freshman in the race finishing right before Sethre in 65th. Siler Stein crossed the line in 71st place and Alex Paradise was in 94th place, not fairing as well in the heat. The boys from Berthoud finished in eighth place. Faith Christian Academy, Lamar and Alamosa took the top three spots in the team competition.

Transfer students are required to run sub-varsity for the first five meets of the season, according to the Colorado High School Activities Association. Because of this rule, many future top runners will be racing one another in the open races. Faith Christian, Lamar and Frontier Academy look to add several top runners to their stables. Berthoud’s Jonathan Wyrwas transferred from Resurrection Christian Academy this season and he finished in 11th place, with the fourth-fastest time of all Spartans racing this week.

The novice races were both won by Berthoud runners. Kathryn Mathiesen and Kace Thoren each chased the lead bicycle around the shortened course in their respective races. Mathiesen won the girls race by nearly half a minute, but Thoren was chased by his teammate and fellow freshman Joe Malinowski who finished just two seconds behind him.

Eight more athletes will join the lineup for Berthoud as they race next week at the Waneka Classic in Lafayette on Saturday.