For Zac Traver, head coach of the Berthoud High School (BHS) boys soccer squad, he and his team are beginning to see the tremendous amount of work they have put in the last few years begin to pay off with some success on the pitch.

While Berthoud fell in their home-opener by a 4-1 final to 4A/5A Mead in a non-conference match Saturday morning, the Spartans find themselves at an even 2-2 on the season, having won more games than they have the previous two seasons combined and in their two wins, scoring more goals in a single match than they have in any match in five years. 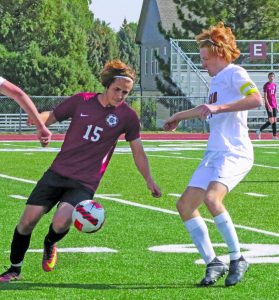 Speaking about Saturday’s match with Mead, Traver explained, “It was just some bad passes, it was just some unclean play, we keep talking about how we have to beat these good teams with clean play. But they really played hard and they know how to get back in the game after they get let down for a few minutes, and I really appreciate that from the boys.”

Mead did control the ball for a sizable portion of the 80-minute contest Saturday morning but Berthoud’s defense, at least until very late, largely kept the visiting Mavericks at bay. After having made several terrific saves, Mead was able to get one past Berthoud goalkeeper Kellan Marks to take a 1-0 lead 11:40 into the first half.

Marks made several more excellent saves, one at the 19:19 mark where he leaped to his right and deflected a sure-fire score that would have given the Mavericks a 2-0 lead. Berthoud got their goal with a little assistance off a Mead defenseman’s head at the 18:30 mark in the opening half to knot the score at 1-1. Unfortunately, from Berthoud’s perspective, the Mavericks scored twice more in the second half, once at the 25:18 mark when Berthoud suffered a momentary defensive breakdown and a final one at 6:15 when the match was all but decided.

Traver was largely complimentary of the plate put forth defensively and made special mention of Marks’ performance as goalkeeper. “Kellan is the man right now, he’s standing on his head in goal, we just let down for a few minutes that wasn’t all on him for sure,” Traver said. “It was 4-1, but in my head, it was really 2-1.”

Furthermore, the solid start to the season where Berthoud’s two losses have come against 5A schools, has the team confident and playing a cohesive brand of soccer that is critical in a complex and nuanced sport. The team’s pair of wins – 10-0 against Dolores Huerta and 8-2 against Sterling, both on the road – provided a boost that has the team believing they can play against anyone.

As Traver explained, “It’s been a big confidence boost; we’ve scored more goals than we’ve had in five years. The boys are smart enough to know that we weren’t playing the best teams, we played two teams that didn’t have a lot of subs, but it really got in their heads in a big way that we can really win games this year.”

“We’ve had a rough couple of years, call them rebuilding years if you will,” said senior Rikky Coke, who has compiled 11 points thanks to four goals and three assists through the opening month of the season. This year it feels like things are clicking, you get on the pitch and once the whistle blows, you’re there, you’re in the zone, and I haven’t felt like that on a high school team in a long time and it’s my last year but I’m glad we’ve hit that stride.”

To keep building, Berthoud knows they have the formula to put together a stout season and their lengthy experience playing together – much of the core group has been playing together in Berthoud since well before high school – will only continue to serve as a boost. The team has also welcomed in some new players this season, both transfers and younger players who, according to Traver, have instantly become ingrained members of the squad.

“It’s about the guys working together, we’ve got more boys coming out, we have some new guys this year that, luckily for us, have some really great skill and my team has been amazing at adopting these new guys so instead of having a new kid, it’s like I’m coaching them forever. It’s been four years for the seniors and three for the juniors now in this program and we’re really starting to come together,” Traver said.

Berthoud (2-2) will host Niwot (2-2) at Max Marr Stadium Thursday for their next match.