No breaking up cross country at Loveland Sweetheart 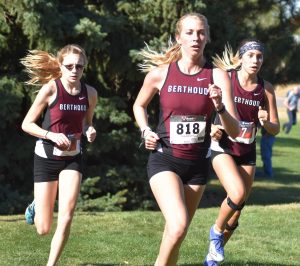 After two weeks scoring at the top of the meets, the Berthoud High School (BHS) cross country teams did not earn a team award but still placed near the top third of the pack at the Loveland Sweetheart Invite last Friday. The difference was who was in the pack this week. Most of the teams were 4A and 5A schools who usually qualify for the state championship meet. Three teams from Cheyenne, Wyo., also attended the meet.

Keeping together during the first part of the race was the assignment for BHS’s varsity runners this week. Cailey Archer, Ellie Sundheim and Ally Padilla ran three abreast for the first half of the race. The senior, Archer, took her usual position near the front of the second group of girls with the younger Sundheim and Padilla trying to keep pace. The coaches felt if Sundheim and Padilla committed to a faster start then they would be able to hold on to a higher placing, which they did. Padilla set a personal-best time and Sundheim has only run faster once this season. Archer (21:53) has led the girls team each week, but this time Sundheim (21:25) and Padilla (21:29) had more in the tank on the final loop around Lake Loveland.

In fact all of the other varsity Spartan girls ran their second-fastest race of the season. Julianne Evans Dennison (22:59) and Gigi Babyak (23:26) combined with the others to finish in eighth place as a team. Daria Degnan (23:58), Gretchen Marty (23:59), Kim Blough (24:15) and Sierra Pirkey (25:54) also competed for Berthoud in the varsity race.

The course was not a particularly easy one, but the fast times were due to the teams attending the meet. Loveland High’s Zac Witman (16:32) and Lucas Westbrook (16:33) finished one-two on their home course, leading Loveland to win the boys team title and the pizza that was given in lieu of a trophy. Berthoud’s varsity boys finished in seventh out of 22 teams. Only 44 seconds separated the first Spartan, Leonard (17:55), from his final scoring teammate, Jonathan Wyrwas (18:39). The seniors were sandwiched by sophomore Eli Greenslit (17:58), junior Kyle Conlon (18:03) and senior Siler Stein (18:19). Lane Pirkey (18:44), Sam Hatton (18:45), Joe Malinowski (18:59) and Gabe Smith (19:39) finished close behind.

The juniors and seniors competed in the Runner’s Roost Invite at Adams County Fairgrounds on Tuesday, Sept. 25, while the freshmen and sophomores have a week off to prepare for the Pat Amato Frosh/Soph meet on Oct. 2. The whole team will be together for the Tri-Valley Conference meet on Oct. 9 in Mead.