As if competing for a championship is not hard enough, going into sudden-death overtime adds yet another layer to the challenge.

Playing at The Classical Academy (TCA) in Colorado Springs this past Saturday in the regional tournament, the Berthoud High volleyball team had to play a final tie-breaking set, a best of one so to speak, to take home the regional championship and punch their ticket to the 4A state championship tournament. 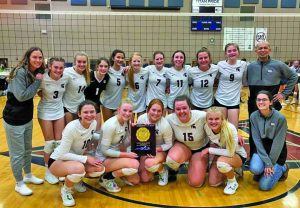 As a result of each of the three squads, which also included Durango, having suffered one loss in the round-robin format, two final tie-breaking matches that were comprised of a single set, first-to-25 points, had to be contested to determine the regional champ and state qualifier. After TCA defeated Durango 1-0 in the first tiebreaker, Berthoud got the best of their hosts, defeating TCA in the be-all, end-all set by a 25-20 final to claim the title.

To say it was a mentally-taxing day and an emotional way to win would be an understatement. As Head Coach Mil Santos explained, “They went through all the emotions, the lowest of low after losing to TCA and then the highest of highs after they got that last point to win and move on.”

Santos explained he gave his squad some time alone to rest, both physically and mentally, and they responded well. “We quoted Eminem, we have one shot, one opportunity, are we willing to take it, and they said yes and we took it, that’s what they did, nothing more,” Santos, who is accustomed to coaching at the highest level having led Berthoud to the state championship in 2001, said.

“There definitely was nerves, we were all tired, we were all exhausted, we just expected it to be called, we didn’t expect that tie-breaker match to be played,” said senior Emma Genger. Yet Berthoud found the resiliency and mental strength to persevere. Genger continued, “During the game, we were so mentally strong, we lost the first two and came back to win the next two was a huge undertaking. It was just pulling together as a team to win that last match and go to state.”

14 of the 16 wins the Lady Spartans earned over the course of the season with 3-0 sweeps, having to fight through four- and five-set matches was something they were unaccustomed but a challenge they conquered last weekend.

“This game is hugely mental, the mindset has to be ‘if this is our last game, how do we want to play it, be proud of our performance or be disappointed’ and we pulled together and won. We took a lot of deep breaths to get the nerves out, but the thing was not get in those holes, they get a point, we get three more, we lose the ball, we get it right back, we had to prevent those runs from happening and that’s how we won.”

Prior to traveling to TCA for the regional championship, the team was given a choice of five different lineups to employ by Santos and his staff. The one the squad selected proved to be the right one as Santos explained the team played his best, most complete volleyball of the year in the pressure-packed atmosphere at regionals.

“Everything seemed to click, we passed well, we played defense well and the big one that really helped us a lot, was being smart as a hitter. A lot of times we keep setting and hitting the same thing over and over again and expecting different results but, in this case, we were a lot smarter, we placed the ball a lot more, and that was the big one,” Santos said. “The big thing is, all year from the very beginning, it was hard for us to compete with the top-10 teams but having to compete with TCA and know that we were able to beat them we can build on that, take what we learned, do exactly what we did being smart, in being resilient, hopefully we can take with us to this weekend.”

With the regional championship, Berthoud earned their spot in the 12-team state championship that will begin this Thursday at the Broadmoor World Arena in Colorado Springs. The format includes both a winners and elimination bracket that assures all teams will play at least two matches and the 4A bracket contains a number of teams Berthoud knows well including conference rivals Frederick, Thompson Valley and former league opponents Mead, Windsor, Erie and Holy Family.

The Lady Spartans will face off with Niwot in the opening round at state, the 2021 Longs Peak League champions led by former Berthoud Head Coach Daisha Agho. The Lady Cougars defeated Berthoud in the pair’s meeting earlier this year but, as Genger explained, a lot has changed since then.

Berthoud and Niwot will play at 11 a.m. on Thursday, Nov. 11 with the winner advancing to face No. 3 seed Windsor in the quarterfinals.