There is nothing more rewarding than reaching a goal you have set for yourself.

Entering her senior season on the Berthoud High School (BHS) tennis team, Sydney Hocker wanted to earn a spot in the state championship tournament. Mission accomplished. Hocker, who plays the three singles line for Berthoud, earned her spot at state after winning in a playback match 6-3, 6-0 to take second place. 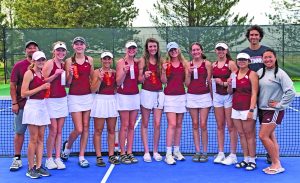 “It feels really good, kind of surprising. I was a little more nervous than I should have been. It was just about keeping a positive mindset, keep moving my feet, staying active, staying on my toes.,” Hocker said with a big smile. “I think it’s pretty special if I can say so, it’s pretty cool in my first year playing singles that I am able to make it this far. “I definitely had the mental game, I thought that I could do it, I know I had the skill, but I just had to go out there and do it, put it out there, I had to prove it.”

It was not easy, however. Hocker won her first match in sweeping fashion, 6-0, 6-0 over her Fort Lupton opponent. Hocker then advanced to the title match but was defeated. Due to the structure of the regional tournament, she had to play another match, her third of the day, to get the second spot in state. Hocker battled some nerves early and an opponent who never relented. But Hocker carried the day, her stamina and endurance proving key.

“I am thrilled for Sydney, she is a very solid player, she has the dedication, she wants to put in the work, she wants to give more effort no matter what. There is only so much (assistant coach) Ted (Fabiano) and I can coach, they have to want to be out here and want to do this, and she does, 100% of the time, and it makes working with her that much easier,” said Berthoud Head Coach Hanna Grow-Morales. “We can work on mechanics with her, she is super-coachable, she takes everything, she is a terrific player and a terrific player.”

Hocker earning the spot in state was all the more impressive considering that this was her first season in singles; in her previous three seasons on the varsity roster, Hocker played as part of a doubles team, assembling an 8-1 record and making state last season on the one doubles line.

“It was definitely different, it taught me that I’m more skilled than I thought, you have to be a little more quick on your feet than as a doubles player since you have to cover the whole court by yourself,” Hocker explained.

Berthoud also saw the team’s two-doubles line of Lyndsey Pancost and Kelsi Thoren earn a state berth by taking second place in their bracket. Coach Grow-Morales said the pair meshes so well together, a key in any successful doubles line, but that the two also have an instinctive understanding of the game that serves to further enhance their strengths on the court.

The three who will be representing BHS at this year’s state tournament expect there to be some nerves and know they will be facing the best competition they have seen all season, but all three are going in with a positive mindset.

As Hocker explained, “I just have to believe in myself, believe I can do it, remember that I earned my spot to get there and I have the skill to do this,”

The 2022 3A state tennis championships will be held May 12-14 at Memorial Park in Colorado Springs.