It’s a good problem to have.

The interest in participating in the Berthoud High School (BHS) golf team has become so great that Head Coach David Hunn, now entering his fourth season leading the program, has had to hire five additional assistant coaches and will need to split daily team practices between two different courses. 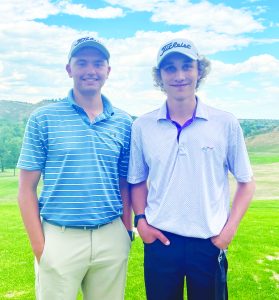 Photo by Dan Karpiel – Berthoud High School boys golfers Christian Foxworth (left) and Coyle Hagerty return to lead the Spartan golf team this fall. Both young men have been instrumental in helping establish the BHS golf team as one of the premier programs in the region

The success that both the boys and girls golf programs at BHS have achieved under the leadership of Hunn and Assistant Head Coach John Perry – the boys winning back to back district titles and the girls having won last spring’s regional crown and showing out with a 7th place finish at state – has helped spurn a spike in interest. The Spartans have 22 players out for the first day of practice on Tuesday at Mariana Butte in Loveland, with additional players waiting in the wings.

The expectations for the year are as high as the participation levels. “With the guys I’ve got, the goal is totally to send four to state, send a team, the boys are ready for it,” Hunn said. “They’ve seen the girls do it in the spring, there is a healthy rivalry between the teams but they all see themselves representing Berthoud golf, it’s just all in different seasons.”

For the opening day of official practices, Hunn needed to split the team in half, with a more experienced contingent showing up to Mariana Butte in the early afternoon and the second, lesser experienced group, arriving for practice a couple hours later. The decision to split even the early season practices was born of Hunn’s desire to maintain as low as possible coach to player ratio, assuring each player, regardless of experience and ability, gets the best.

“I’m really working on a ratio of one to four of a quality coach with each of the players, they need that attention to get better,” Hunn said, commenting that the program will continue to ascend with the greater levels of attention. “The way I envision this program, even if they haven’t ever touched a club before (their freshman season), by the time they’re sophomores they should be ready to rock and roll and compete.”

Even with a roster that numbers nearly as many as some football teams, the BHS squad will be led back state qualifiers Christian Foxworth and Coyle Hagerty. Foxworth, a senior, was instrumental in the team’s district championship repeat last season while Hagerty gained valuable experience as a 2021 state qualifier. The pair, alongside David Sarmiento, are the most accomplished players on the squad but Hunn said all three will be pressed hard by the younger golfers.

‘Pressure wise, it’s all self-inflicted, I have work on trying not to let outside pressure to get to me, I’m focused on keeping my head down, keep grinding, keep hitting the ball like I know how to and keep scoring like I know to,” Foxworth said when asked if he felt any pressure entering his final campaign as a Spartan golfer.

Hagerty was equally unphased by the expectations for the squad saying, “Personally, not really any pressure, I’m just here to focus on getting better at golf.  I don’t really think about the end result, I think about what I need to do to get there, I take it step by step, day by day,”

Both have poured in countless hours over the spring and summer working on all aspects of their respective games. The work has paid dividends as Hagerty explained he has improved across the board saying, “I’ve been working on swing fundamentals, been doing that pretty much all summer and back through the winter, I’ve seen improvement in pretty much everything. I’m hitting the ball more solid, I’ more consistent, I can trust what I can do.”

Foxworth has put in mountains of work not only on his game but on overall physical fitness as well. Looking as fit and trim as ever, the senior explained, “I’ve been working with a trainer and my strength and endurance has really improved over the last six months, working with (swing coach) Jeff McNair has really helped getting that consistency down and the confidence level up and working with my trainer, Dylan Johnson, he has really helped my flexibility, mobility and endurance when it comes to walking and playing a full competitive round.”

The leadership has had positive ripple effects throughout the program, with Hunn remarking, “Christian has put in a lot of work to get to where he is, these young guys see that, and using Christian as that quality individual, in addition to being a quality golfer, they’re saying ‘I want to be like him’ and for all of our upper classmen, the requirement is that they lead by example.”

The Spartans, with various groupings based on tournament registration allowances, are currently slated to compete this year in 22 events prior the state championships. This fall’s regional tournament – the make or break event for state qualifying – will take place at Highland Hills in Greeley on Sept 20.

The Spartans will begin the season swing this Thursday at Petty Park in Brush but have three events scheduled between Highland Hills, The Broadlands and Rain Dance National Monday, Tuesday and Wednesday next week.