It has been a season to remember for the Berthoud High girls tennis squad. Playing in the 3A Region 5 championships last Friday in sweltering conditions at the Dawson School in Boulder County, the Lady Spartans won a pair of individual regional championships, qualified six of seven lines for this week’s 3A state finals and earned the second-place trophy in team competition. 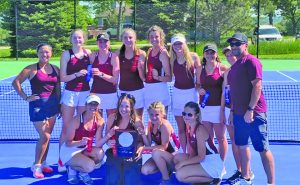 Berthoud’s Holly Jaros, playing in two singles, won both of her matches to win the regional crown while Berthoud’s Megan Malherbe and Danae Alverson also gutted out a pair of tough matches to take the title in the four doubles line. Gretchen Marty (one singles), Nicolette Mary (three singles), Sydney Hocker and Kendra Maitland (one doubles) and Alana Hymel and Lyndsey Pancost (two doubles) all also earned state berths by taking second in their respective brackets.

As a team, Berthoud posted 39 points to bring home the second-place team trophy, just a hair behind host Dawson who earned 41; Peak to Peak scored 30 for third while Fort Lupton was a distant fourth.

Jaros’ win in two singles was made all the more impressive as her opening match went three sets and surpassed the three-hour mark, all in 90-degree temperatures on an Astroturf court. Jaros commented that she had to ice down her shoulder following the win but, knowing her spot in state was secured, was not going to pass up an opportunity to win the regional title and earn a more-favorable seed at state.

Mike Jacobsma) let me have a little bit of a break to relax and take a breather and just calm down on everything,” Jaros said. “I went into it thinking ‘okay, I’m already in, I’m good to go, but I want to try my best so I can get a higher seed in state.”

Jaros hydrated, ate a banana and got a few minutes of rest under a shade tree before heading out for her title match. Once on the court, it all became about mental endurance. Jaros stayed aggressive on her serves, took a lead and never looked back, winning the match and with it, the regional championship, it straight sets.

“After I won it was just a relief, I was thinking ‘thank God I’m finally off the courts,’ but I felt really happy and I was very proud of myself,” said Jaros, who added that she never had a formal training as a tennis player. “It definitely is mental since it’s singles, so being mentally though and pushing through and knowing I’m just as capable, they were both tough matches and it really made me feel good, knowing I was a good player, it confirmed that to me. I really owe a lot to both of parents with just putting me in rec and pushing me to do sports and spending the time with me and letting me have the opportunities I do.”

Berthoud’s other two singles line, held by Gretchen and Nicolette Marty, each fell in their respective finals matches but earned places in state. Gretchen, the team’s lone senior in the singles lines, was defeated 6-2, 6-1 to Dawson’s Lila Travis while Nicolette lost 6-4, 6-1 to Eloise Shehan, also of Dawson.

Sydney Hocker and Kendra Maitland entering the regional championship a perfect 8-0 on the season. The team earned their spot in state with a win the first round but suffered their first defeat of the season in the finals but the duo will be a tough out at the state finals. Berthoud’s two doubles team of Alana Hymel and Lyndsey Pancost also earned a spot at state with a win in their first match before falling in straight sets in the finals.

The four doubles line for Berthoud, Malherbe and Alverson, turned in a stellar performance to win the regional title. As Malherbe, who is only a freshman, explained, “It was really exciting, it was a really fun game and it was especially good for me since it’s my first year, I was really happy about, we worked really hard in that game. In the first set we were down and we came back in the second one and in the third, we had the endurance and we won.”

Doubles is largely about teamwork and communication and Malherbe explained her and Anderson have both in spades saying, “It’s all feeding off of each other’s energy and we said, ‘this is so important so if we can keep pushing, we can do it,’ Denae and I work really well together, one part of the game that we enjoy is communicating and finding new strategies, we talk between points and sometimes we just joke to keep things fun.”

The 3A state tennis championships will be held at Memorial Park in Colorado Springs this Friday and Saturday, June 11-12, with first round matches will begin at 9:00 a.m.