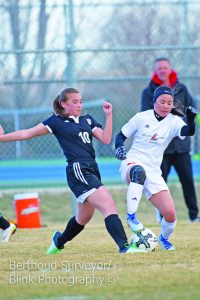 Photo by Lance Elmore, Blink Photography – Berthoud’s Natalie Antczak prepares to swipe possession of the ball away from a Loveland player in a match earlier this year. Despite dropping their last three games, the Lady Spartans stand at a very respectable 5-4 overall on the year.

If the Berthoud High School (BHS) baseball team’s goal of reaching the post season for the first time in recent memory is to be realized, they are going to have to hold their own through what will be a brutal Tri-Valley Conference (TVC) schedule. The Spartan sluggers did exactly that last week, splitting a home/road series with TVC behemoth Holy Family. Berthoud won 7-2 at Jack Sommers Field at BHS last Thursday and then fell by a razor-thin 6-5 margin on the road on Saturday.

In the first game of the series with Holy Family, Berthoud jumped out early and never looked back. The Spartans scored five runs in the home half of the first inning and two more in the second. The Tigers were able to scratch out one run in both the third and seventh frames, but the hot start to the game from Berthoud kept the Spartans in control from the get-go. Senior pitcher Quinn Oliver was money on the hill for Berthoud, allowing only seven Holy Family hits and just a single earned run in his six innings of work. Ben Hardy and Chris DeSousa each had a pair of hits for Berthoud, driving in three and two runs, respectively, while the Spartans played clean in the field and were not charged with any errors.

As Berthoud manager, Buddy Kouns, has stressed all season, the team’s strength lies in their resiliency. After surrendering five runs in the second inning to the Tigers on Saturday, the Spartans kept at it, scratching out two runs in the fourth inning to tie the game at five-all entering the sixth. Holy Family would score once more to take the game, but Berthoud never gave up the fight, and coming oh-so-close to sweeping the series had to leave the Spartans feeling good about their effort in Broomfield. Senior Brent Fowler had a stellar day at the plate, going three-for-four with a RBI and C.J. Balliet hit his TVC-leading sixth double of the season in the loss.

Berthoud (7-4, 2-4 TVC) is sitting pretty in the RPI, where they currently rank 11th, and are joined in the top-11 with four more TVC teams, including Nos. 1 and 2 Windsor and Roosevelt, respectively, No. 5 Holy Family, and No. 10 Mead. The Spartans next series comes against Skyline (5-5, 3-3 TVC) with the first game in Longmont on Thursday.

After last spring, when the BHS girls golf team turned in their best team performance in the program’s history, taking fifth place at the state tournament, they entered this season knowing it would be something of a rebuilding year. Under new head coach, Troy Diffendaffer, the Lady Spartans have battled cold, wet, windy conditions through the early throes of the season and have shown steady improvement.

Senior Kyra McDonald, the only returning member of last year’s state-qualifying team, has been the leading force for Berthoud on the links. McDonald has been shooting consistently in the mid-80s and is setting and breaking personal bests each consecutive week. McDonald shot 87 and 86 at Colorado National and Harmony Club, respectively, and on Monday carded a stellar 84 at challenging Highland Meadows in Windsor. Isabel Gettings shot 107 at Highland Meadows, also a personal best, while Cora Fate (115) and Stephanie Haberkon (131) turned in their best rounds in what were their first varsity rounds of the season.

Berthoud will tee it up at beautiful Mariana Butte, which serves as the Lady Spartans home course, for their next tournament on Monday, April 17.

The BHS girls soccer team began the season with a bang, winning five of their first six matches by a combined score of 30-5, but in the last week ran into road blocks in the form of some of the best 4A teams in the state. Berthoud has dropped three-straight matches, losing 5-1 to Thompson Valley on Mar. 29 and then falling 10-0 to Windsor and 6-2 to Holy Family on April 4 and 9, respectively, in what were their first TVC tilts of the season.

In the match with Holy Family, the Lady Spartans got a pair of goals from sophomore Hailey Pepper, who now has a an impressive nine goals and 22 total points on the season. Fellow-sophomore Maddie Barcewski has scored 13 goals for Berthoud this year, while senior and team captain Liz Bosnich has four in the six matches in which she has competed.

Berthoud (5-4, 0-2 TVC) will play their next match on their home pitch when they welcome Elizabeth to Max Marr Field at BHS on Saturday, April 14.

Girls tennis: Berthoud gets the best of Skyline 4-3

The BHS girls tennis team welcomed Skyline to the Berthoud courts for a match on Monday, April 9, and, thanks to strong showings in all four doubles matches, were able to notch their first conference win of the season.

Berthoud will make the long trip to Sterling April 16 and will then host Frederick for their final regular-season match of the year on April 19.