Doyle and “the girls” going to state cross country 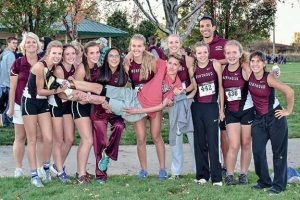 On Thursday, Oct. 20, the Berthoud High School (BHS) cross country team headed to Greeley for the 3A Region 4 meet. If one looked at the rankings for the meet, it appeared BHS might be able to qualify one boy and one girl to the state meet. However, the Spartans had another plan, a total team plan.

Assistant Coach Jordan Jennings sent the non-racing team members to strategic places around the course to cheer and encourage the Spartans. The managers kept track of times at the mile markers, parents and friends cheered and coaches offered tactical information as the runners reached deep inside themselves to put forth their best effort. It all paid off with most of the athletes running faster than they ever have.

The boys race was first. The race plan was to get into a good position and make other teams try to catch the Spartans. Berthoud’s Josh Doyle jockeyed back and forth between seventh and 10th places until the final half mile of the race when Doyle pressed the pace and dropped all those around him finishing in seventh with a time of 17:08 and earning his trip to the state meet.

Sophomore Kade Leonard and junior Noah Burtis maneuvered throughout most of the course together. According to rankings, the two were not to be able to be in the top 45. One of the best things about sports is that rankings mean nothing when the competition starts. Leonard finished the course in 28th place with a time of 17:57. Burtis was 30th in 18:02. Burtis has improved over a minute-and-a-half from his best race time last season. Not far behind them was freshman Carlos Gutierrez in 39th place in 18:18. Gutierrez could not match the first mile splits of the older boys and was behind most of the other Spartans in the beginning of the race. He kept his composure and spent most of the race passing runners. Closely behind Gutierrez was another sophomore/junior duo of Siler Stein and Murphy Vogele-Zimmerling. Stein, with over a 2:30 improvement from last year’s best time, placed 42nd in 18:24. Vogele-Zimmerling completed the course in 18:33 for 46th place. Eric Rennaker had never broken 21:30 for the 5K until this season. The senior has improved every race this year. He finished the course in 18:56 in 60th place. Berthoud’s other runners were Ty Williams in 19:01 for 64th place and Gabe Ramirez in 69th place in 19:10. The boys team finished in sixth place. Frontier Academy won, Estes Park was second, University High and Resurrection Christian schools took the four state berths. The top 15 individuals qualified as well, so Doyle punched his ticket to state and hoped he wouldn’t be the only Spartan to go.

Benefitting from the excitement of the boys race and encouraged by their fast times, the girls from BHS lined up to race.

Maycee White knew she had an outside chance of making the top 15 and took off near the front of the pack. Following on her heels was co-captain, Alyssa Radloff, with Alex Schultz just a few steps back running in 15th place. Shortly after the two-mile mark, Schultz was passed and fell back to 19th place. White and Radloff remained in the top 15. White finished in 12th, Radloff was 13th, with times of 21:16 and 21:19, respectively.

Behind Schultz (21:34), Liz Bosnich was running the best race of her short career. Two months ago, Bosnich raced her first 5K in 25:44. On this day, she finished 37th place in 22:31. Kathryn Mathiesen was the fifth and final scorer in 42nd in 22:43. With 700 meters from the finish, Mathiesen found another gear and began passing other runners to give the Lady Spartans a third-place finish and a trip to state. Lily Burtis was 69th in 24:23. Hannah Buren and Julianne Evans Dennison tied at the line in 24:31. Buren was awarded 72nd, Evans Dennison 73rd. Cailey Archer had a rough day, finishing in 27:02 for 86th. Frontier Academy won, Eaton was second, Berthoud third, and Estes Park earned the fourth and final spot into the state meet.

The girls will race at 10 a.m. and Doyle will race at 11:20 on Saturday, Oct. 29, at Norris Penrose Event Center in Colorado Springs. Doyle is ranked 60th, and Berthoud’s girls are currently ranked 21st, but the Spartans know rankings on paper don’t mean anything once the gun sounds.