The Berthoud High School (BHS) girls soccer team faced the Skyline High School Falcons for their third conference game on Monday night at BHS. Going into the game, the Spartans were looking to pick up their first Tri-Valley Conference win.

The Falcons came out hot at Max Marr field, scoring two goals in six minutes of play. The Spartans made some passes, but couldn’t connect enough to score a goal in the first half. Berthoud trailed Skyline by five goals after 40 minutes. 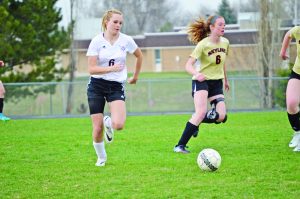 Berthoud’s Hailey Pepper (left) races for the ball in Monday night’s game at Max Marr Field at BHS. The lady Spartans came up short against Skyline, losing by an 8-0 final score.

Berthoud held Skyline from scoring in the first eight minutes of the second half, but the Falcons scored again and lengthened their lead to six goals.

BHS was shut out for the rest of the game, which ended with a score of 8-0 in Skyline’s favor.

“We were very aggressive toward some things. I think that was the best thing we did,” said sophomore forward Hailey Pepper on the loss. “They just had more possessions than we did.”

With the absence of multiple players, Pepper took a role of leadership during the game, guiding her team down the field. She has scored nine goals this season and leads the team in assists with four.

Some of Berthoud’s top players had to sit out their conference game, so new players were thrown into the mix and the Spartans lineup was moved around. Their leading scorer, Maddie Barcewski, got a concussion in the team’s loss against Holy Family, and freshman Bre Fowler was also absent during Monday night’s game.

Coaches Kelly Hardegree-Ullman and Abby Widrig have been experimenting with their lineups with the absences of many players through the last few games. “We’ve been trying to figure out where we can place girls to best benefit the team,” said Hardegree-Ullman.

It’s never easy to have to have chemistry with new players when a starting lineup has already been set for the majority of the season. The coaching staff has been focusing on getting all the girls to work together and to push through the adversity they have faced within their lineup.

“Hopefully we have our players back for the next game,” stated the Spartans head coach, who is in her second year with the program, “That would help in terms of familiarity and in terms of having our starting 11 back in.”

Berthoud still has their sights set on a playoff berth. They are not far out of contention with an overall record of 5-4. The Spartans have three more conference and one non-conference game on their schedule. The team is hoping to win some of their last games and have a possible chance to make it to the postseason.

The Spartans will welcome the Roosevelt Roughriders next Wednesday, April 25, in hopes of picking up a Tri-Valley Conference win.