While there is no such thing as a good loss, there is often more to be learned from defeats than there is from victories.

Playing at home on Tuesday night, the Berthoud High School (BHS) volleyball squad faced off with No. 1 ranked and defending state champion Thompson Valley. While the Lady Spartans lost the match in a 3-0 sweep (25-19, 25-19, 25-16) the team feels the game provided a good early season measuring stick. 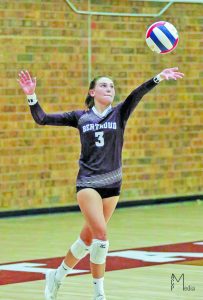 Photo by ACP Media – Berthoud’s Brooke Nelsen prepares for a serve in a game at BHS earlier this season. Nelsen and the Lady Spartans fell by a 3-0 final on Tuesday night against No.1 ranked and defending state champion Thompson Valley.

“We played our game, and I would say honestly we kept our side cleaner this game than we have up to this point,” said Berthoud Head Coach Hayden Sweet. “If we play this kind of error-free, and volleyball is an error game, in the past games giving up unforced errors is what really has hurt us, so if we can model this and play a cleaner game like we did tonight against some of our other opponents who don’t have half the offense that this team does, then we’re going to be in a really good spot.”

The Lady Eagles recorded 45 kills, eight aces, and 10 blocks over the three-set match. Berthoud did their best to counter the powerful attack and while they did see some success, Thompson proved why they are the top-ranked 4A team.

“I feel like our strong suit is defense, we adjusted our defense so we were blocking cross so they couldn’t hit hard cross and we could pick up their line shots,” said senior team captain Zoe Campbell. “I feel like we fell a little bit short with our offense, we just didn’t put as many balls down as we needed to and that’s where we came up a little bit short.”

Thompson jumped up quickly 3-1, then 5-2 after a Berthoud serving error. Brynn Moeller blocked a kill attempt from Thompson’s front row and Charlee Russick followed with a back-to-back kills to cut the Lady Eagles’ lead to just one, 8-7. Yet Berthoud’s quests quickly countered, rattling off four straight and six of the next seven to take control with a 13-8 lead.

The Lady Spartans knew what they were in for and entered the game both with confidence in their abilities and trust in their game plan. Berthoud knew they would have to play as clean of a game as possible, avoiding unforced errors and mistakes that have haunted them at times in the early throes of the season. Sweet stated after the match that she was very pleased that her team kept communicating, was regularly in the right position, and avoided mistakes.

“Sometimes it’s easy if you have low expectations to not feel as bad when you lose, whereas if we have higher expectations this is the kind of game we will play,” Sweet said. “We didn’t come out going ‘we’re going to get our butts smacked so why are we even trying,’ we came out and did everything we can, we avoided making stupid errors and we’re going to see what can happen and that’s exactly what they did tonight.”

While Thompson proved their mettle as an elite team, regularly staying just a step or step and a half ahead of Berthoud, the Lady Spartans kept battling throughout. With Brooke Nelsen serving in the second set, Berthoud scored three straight points, cutting Thompson’s lead to 8-5. In the third set, serving aces from Moeller and Jaci Taylor gave Berthoud a boost, but again, Thompson just proved to be able to take a punch and then counter with a few of their own. Two kills from Russick made the score 12-11 in the third set, marking the first time all match that Berthoud held the lead. Yet the Lady Eagles came roaring back, scoring five straight, and 13 of the final 16 points to take the third and final set to complete the sweep.

While Berthoud was hoping to score the upset victory, both Sweet and Campbell admitted it was a long shot and that the game will prove a valuable learning experience. Campbell is very optimistic that the team is ready to break out, stating they have gotten in sync with what Sweet expects. Said Campbell, “I think we’re starting to find our rhythm and starting to get comfortable, and I think tonight was the best we’ve played, even though we lost, but we will only go up from here. If we play our best, I think we can go far this season.”