The expectations were high to begin the season. And the team exceeded them. 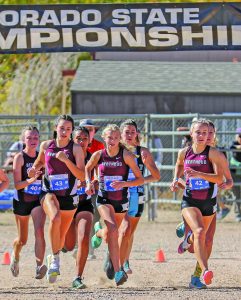 Photo by Caroline Creager – Berthoud harriers (left to right) Josie Diffendaffer, Ally Padilla, Jaycee Williams and Olivia Krueger, led the Lady Spartans to a school best 3rd place in the 3A state championships on Saturday. Williams’ 4th place finish was the best ever finish in the state meet by a Berthoud runner.

The Berthoud High School (BHS) cross-country teams traveled down to the 3A state championship meet at the Norris Penrose Event Center in Colorado Springs and made history. The BHS girls team finished in third place in the 20-team field, the best finish in the history of the program, while the boys finished in fifth place, also the top mark in school history. Furthermore, sophomore Jaycee Williams took fourth place in individual rankings, the top finish ever by a Berthoud runner while senior Olivia Krueger placed ninth to join Williams as the only two to finish in the top-10 at state.

“It means a lot. I think sometimes it’s hard to sit here and reflect on what we’ve done, I feel like I’m always on to the next year,” Berthoud Head Coach Jordan Jennings said. “I do enjoy these moments, not for myself but for the athletes because they’ve done some pretty awesome stuff, it’s awesome for the school and it’s great to see the excitement around the sport. We want to make Berthoud a running town, something the town can take pride in and in that aspect, I think we have a lot to be proud of.”

“My gameplan was to stick on the group for as long as possible, just stay with them and hold on as long as I could,” Williams said was the approach she took entering the meet. Having competed last year at state, placing 19th, Williams said knowing the course was a benefit this year, allowing her to take a strategic approach to the race. She came out of the hilly part of the course feeling great, she explained, and pushed hard though the final leg of the 5K race, passing other racers along the way. “I was very happy, I wanted to get top-10 and to get top-5 is just really cool, when I realized where I was, it was just an amazing feeling,” she said.

While Krueger, Padilla and Diffendaffer are all seniors who competed in their final high school race at state, the Lady Spartans harriers have a deep team that also extends down to the middle school level where athletes are developed by Coach Amy Pasch with high school goals in mind.

Slauson, who is only a freshman, explained, “I know that we’ve had the fastest times this year and being a freshman as a part of a really good cross-country team means a lot to me. I think it’s important to keep pushing myself more and more, for us as a team to keep pushing, I look up to the older girls on the team and I think one day people will look up to me.”

The boys’ team has an even greater preponderance of youth with Leal-Midgett the only senior. The squad figures to keep improving in the years ahead and, as Bothun explained, they are not satisfied with fifth place and will keep working the climb the ranks higher in the seasons to come. “I think next year we will be even faster; we’re not losing Caden and we’re training a lot harder, I think the future can be even better.”

Jennings, who has been leading the program now for four years after serving as an assistant for a period prior, said the goal is to keep improving both with each athlete individually as well as with the team as a whole. “I think it means we’ve set a good foundation a few years back and each year we’ve tried to implement something a little new to keep adding to it all,” Jennings explained. “Athletes keep coming into the program, we keep developing athletes, and now with the expectations they know what it means to be a Berthoud runner. It’s not just about getting to state now, it’s about competing as one of the best teams in the state.”