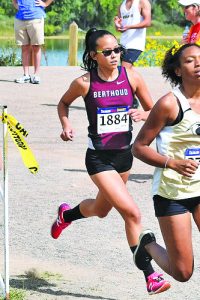 The Berthoud High School (BHS) cross country team met stiff competition at the Centaurus Invite last Saturday. With eight of the 29 teams holding a top-10 spot in the Milesplit Coaches Poll this week, BHS harriers had their work cut out for them. In cross country schools of all sizes can compete in the same races throughout the season. BHS coaches create a schedule that seeks out the best competition, regardless of school enrollment. Sometimes that means trading wins for experience.

The girls varsity race was the first division to race. Berthoud’s team was comprised of four athletes who were just starting their high school careers. Freshman Ally Padilla was Berthoud’s first finisher in the girls varsity race with a time of 22:37 for 81st place. Junior Julianne Evans Dennison (23:09) and freshman Elliana von Seggern (23:10) were separated by one girl as they placed 101st and 103rd. First year sophomore Gretchen Marty (23:28) contributed to Berthoud’s score with her 118th-place finish. Freshman Reese Densborn and junior Alex Schultz were 129th and 140th out of nearly 200 girls. The girls varsity team placed 19th out of 29 teams.

Jonathan Wyrwas was the first Spartan in the boys varsity race in 18:31 for 73rd place. Racing behind Wyrwas, Kyle Conlon was running with teammate Siler Stein for much of the race. With about 400 meters from the finish line, Conlon started to kick it in and passed 11 guys to finish close to Wyrwas in 18:39 for 81st place. Stein was 92nd (18:56). At the Valley 5000, Berthoud’s previous meet, Sam Hatton edged out Lane Pirkey, but both had the same time. This week Pirkey beat Hatton by one second (19:15 to 19:16). Dylan Carder (20:11) and Eric Godfrey (20:33) rounded out the scoring in the boys varsity race. The BHS boys placed 14th in the varsity race.

This week the Spartans were split among three races per gender: varsity, junior varsity and open. All athletes race the same course so times can be compared, but coaches are able to have athletes compete in different races as needed. Kade Leonard posted Berthoud’s fastest time of the day (18:24). The BHS senior ran most of the Open race alone. He finished second, separated by over two minutes between the first-place runner and the third-place runner. Gabe Smith ran 19:54 and placed 39th in the boys JV race. Senior Cailey Archer posted the fastest girls time for the Spartans while running in the junior varsity race. Archer finished in fifth place in 21:50. Ellie Sundheim also competed in the JV race and finished the 5K course in 22:18 for ninth place. Daria Degnan placed fourth in the Open race in 23:49.

The next meet for the Spartans is the classic Liberty Bell race next Saturday, Sept. 8.