It’s often the little things that make a difference – the minute things – the things that even a detailed look at the box score would miss.

A two-out walk with no one on base in the second inning of a game that was already 4-0, it may just have been the most important at-bat of the game. And it was only Mandi Laib’s first at-bat of the inning. 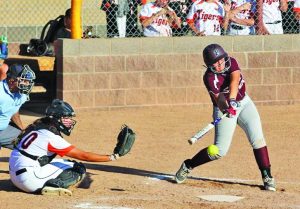 Photo by Tiffany Rafferty – Berthoud’s Natalie Fischer connects with a pitch in a game earlier this season. Fischer has been tremendous for the Lady Spartans this season and boasts a team-best .543 batting average and 20 RBI.

Laib, the Berthoud High School’s softball team’s senior catcher and six-hole hitter, stayed true to her approach and patiently worked a six-pitch walk. It seemed inconsequential, even at the time, but Laib’s free pass set in motion a nine-run inning where 13 Lady Spartans would come to the plate. The outburst of runs propelled Berthoud to the 11-6 win over Tri-Valley Conference (TVC) rival Roosevelt at Bein Field on a very fall-like Tuesday afternoon.

It began with Laib’s walk, but all nine players in the Berthoud batting order came around to score; thanks to seven hits, a passed ball, and two more walks. All in the same inning, with two outs, Laib would drive in the final two of Berthoud’s nine-run frame when she doubled to score Natalie Fischer and Sophie Supernor who, coincidentally, were the first two outs of the inning in their first at-bats of the inning.

“It was a big moment for us; that was huge, it was huge,” a clearly-elated Berthoud Head Coach Buddy Kouns said after the game.

Asked of her approach at the plate with her team trailing four-zip and two outs already recorded, Laib said, “It takes a lot of discipline and you’ve just got to be patient. You want to be aggressive, but you don’t want to be out of control.”

Stephanie Haberkon followed Laib’s patient approach at the plate, forcing Roosevelt’s Malaya Coleman to throw her her pitch, which Coleman never did, and Haberkon earned the second-straight two-out walk. Ellie Yuska promptly doubled, scoring Laib and Haberkon, and came home herself on the first of four hits on the game from junior centerfielder Jordan Schachterle.

Schachterle tied the game at four-all when she crossed home plate on a single off the bat of Sarah Jorissen. Ashlynn Balliet gave Berthoud a 5-4 lead when she came home, thanks to a base hit from three-hole hitter Addi Spears. Spears and Jorissen each scored on Fischer’s subsequent single and, after Laib’s double, Berthoud held a 9-4 lead.

“The way we were able to change that score and flip the whole game was just about being positive, keeping our energy up,” Laib said of Berthoud’s nine-run second inning. Then armed with a five-run lead, Jorissen did not allow a single earned run the rest of the game and earned her sixth win of the season. Roosevelt did score twice in the fourth inning to keep things close, both runs a result of Berthoud fielding errors, but never got within shouting distance.

“When Sarah and I went back out there we knew the pressure was on them, and so we could just be smooth and quick with our approach,” Laib said. “Just working in off-speeds is really important, the job of a pitcher is to keep batters off balance, and we’re not exactly trying to fool them, but just hit our locations. That was a big thing.”

Battling back from the four-run hole they found themselves in so early in the contest was something Kouns made special mention of following the game, pointing specifically to the fortitude the entire lineup demonstrated in the come-from-behind win.

The win over Roosevelt comes fresh off the heels of a 21-2 trouncing the Lady Spartans handed Frederick the day prior, another game where Berthoud’s offensive explosion echoed from every spot in the order. Said Kouns, “Good at-bats are contagious … we have been working all year on a two-strike approach, and we have made some adjustments and they’re working for us.”

Berthoud (12-7, 6-4 TVC) will play four games in the last week of the season, all against league opponents. The Lady Spartans will host Holy Family on Thursday, Sept. 27, and Windsor on Sept. 29 before they travel to Mead on Oct. 2, and will close out the regular season at Bein Field on Oct. 4 against Skyline.