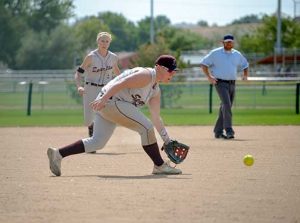 Berthoud third base Ashlynn Balliet prepares to scoop up a ball during the Friday contest against Cedaredge on the first day of the annual Spartans Classic softball tournament held at the Barnes Softball Complex in Loveland Sept. 9-10.
John Gardner / The Surveyor

LOVELAND – An often over-looked aspect of team sports is a squad’s cohesiveness – or lack thereof – goes a long way in determining their ultimate success. Those teams whose whole is greater than the sum of their parts are often the last ones standing at season’s end.

Coming out of the Spartan Classic on Sept. 9 and 10 at the Barnes Complex in Loveland, the operative word coming from the Berthoud High School (BHS) softball team was the group “gelled.” Head Coach Buddy Kouns and several players mentioned their namesake tournament – in which Lady Spartans won three of four games to take third place – helped the group unify as a team.

“I think our team has really gelled this tournament; we’ve picked each other up really well,” said second baseman Delaney Fouts. “Overall we really pulled together this weekend.”

Fouts drove in the tying run and scored the winning run in the bottom of the seventh inning in Berthoud’s last game of the tournament, a 3-2 win over Tri-Valley Conference (TVC) rival Mead.

Berthoud easily dispatched its first two opponents in Friday’s pool play, shellacking Cedaredge 12-1 and a getting mercy-rule-shortened 14-3 win over Widefield. Junior shortstop Sedona Cook laced a pair of triples and drove in three runs in the 11-run win over Cedaredge. Said Cook, “You have to have a clear mind; you can’t go up thinking you have to hit a dinger; you just go up and try to get a base hit, getting on base is helping the team.”

Doubles off the bats of Cook, Langer and Aurelia Miramontes and homers from Sarah Jorissen and Addie Spears highlighted a nine-run fifth inning by Berthoud that blew open what was a relatively close 5-2 game with Widefield. After the game, Cook explained the two big wins helped the team gel.

“The thing is we know we’re a team and we have to work together as a team,” Cook said. “We’ve really gelled super-duper well this weekend.”

Third baseman Ashlynn Balliet, whose two-run homer in the third inning extended Berthoud’s lead from 3-2 to 5-2, explained Berthoud’s defense is a strength of the team.

“I think our defense is doing really well, we’re collaborating well, talking a lot to each other,” Balliet said. The freshman recorded 12 assists from third base and routinely demonstrated the awareness, arm strength and accuracy needed to throw out even the speediest base runners from across the diamond.

“I love playing for my pitcher, I love playing defense behind her, she’s busting for us so I want to bust for her,” Balliet said.

Saturday proved a tougher test, however, as the Lady Spartans fell 3-1 to 5A Prairie View, keeping the host team from the championship game. While Berthoud was able to win the third-place game in thrilling fashion over Mead, the matchup was one Kouns said he and the team entered “a little cautious.”

“In division games anybody can beat anybody,” Kouns explained. “It’s one of those ones where it’s not who we would have picked but that’s who’s in front of us.”

After surrendering a homerun in the first at-bat of the game, Jorissen settled in and allowed Mead to scatter just seven hits over the next six innings. With the game tied at one in the top of the seventh, Mead’s Peyton Anton led off the frame with a triple and came home on an Anna Veltien single to give the Lady Mavericks a 2-1 lead.

Miramontes led off the bottom of the seventh with a single for Berthoud, advanced on a sacrifice bunt from Tristan Pope and moved to third on a Spears ground out. With the tying run just 60 feet away at third base, Fouts turned on an inside pitch, knocking the ball into right field to knot the score at 2-2.

“I was just looking for anything in the zone, just thinking base-hit, get the runner around and in,” Fouts said when asked about her mindset entering her final at-bat of the weekend. “She threw me high inside … usually I like high outside but I was able to get out in front of it early enough to drive it into right field.”

“That’s out of character for her,” Kouns said of Fouts’ triple. “She is a punching-Judy kind of kid that bunts a lot, slaps a lot, but she got the right pitch, something up and in, and was able to turn on it.”

A base hit off Jorissen’s bat allowed Fouts to cross home plate and win the game before Mead was able to even field the ball. Kouns praised Jorissen after the tournament.

“Sarah Jorissen was a battler this weekend. She put us on her back and we rode; she did a really nice job,” he said.

Added Cook, “It boosts our confidence like crazy, it’s awesome; we go in there and say ‘hey we beat this team’ and we know we’re a great team and we can beat Erie and teams like that that are harder.”

The Lady Spartans winning ways continues on Sept. 13 at Bein Field as Berthoud topped archrival Windsor by a 7-3 final. Trailing 3-2, BHS exploded for five runs in the sixth inning to take a lead they did not relinquish. Spears had three hits and scored a pair of runs for Berthoud while Jorissen tallied three RBI in a 2-for-4 afternoon from the plate. The sophomore was equally-impressive from inside the circle, throwing a complete game two-hitter and striking out four Lady Wizards.