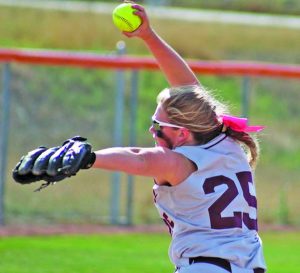 Photo By Tiffany Rafferty –  Berthoud’s Sarah Jorissen pitching at the regional tournament in Erie last October. Jorissen started every game for Berthoud in 2016 and will be the Lady Spartan’s ace once again this fall.

One of the most successful and accomplished programs in the school’s history, the 2017 Berthoud High School (BHS) softball team enters the year with the same goals and expectations it seemingly always has – compete in the state tournament and give themselves a chance at a championship.

“Our goal every year is always to get down there to Aurora, and anything can happen down there … anything less than that is, we’re going to be disappointed,” Berthoud Head Coach Buddy Kouns said at Tuesday afternoon’s practice.

Spears, a Tri-Valley All-Conference selection in 2016 as a sophomore, is part of a talented core of returning players for the Lady Spartans. Spears is joined by pitcher Sarah Jorissen, who also took home All Conference honors last year and was named as an honorable mention on the CHSAA 4A All-State team, sophomore third baseman Ashlynn Balliet and seniors Tristan Pope and Sedona Cook.

Kouns explained some things are still in flux in terms of position assignments, but Pope will be getting a look at first base and Cook at catcher to replace the voids left by graduated seniors Morgan Schachterle and Hannah Langer, respectively.

“We’ve got some girls we’re going to look at, they’re several who will be in the mix … we have plenty of outfielders, we have plenty of sophomores and juniors who can play out there, so the key is to find the right fit for everyone,” Kouns said.

One key positon in which there is zero uncertainty is inside the circle where Jorissen’s role as the Lady Spartans ace is unchallenged. As sophomore in 2016, Jorissen threw 140 of Berthoud’s 146 innings, winning 15 games combined in the regular and post season. The junior explained there will be an adjustment working with a new catcher but “I will work with the catchers and show them how I pitch and that way they can get in sync with me. I honestly think it will be just fine because we have so many great players out here.”
“I honestly feel pretty good, I think the team is going to keep building and we’re going to keep doing what we did last year,” Jorissen said and explained that even after garnering All-Conference honors last season she worked hard throughout the spring and summer to improve. “I definitely worked on getting the movement on my ball better so the hitters can’t track it as much. I really worked on being able to place the ball and how I can handle hitters.”

Kouns’ enthusiasm for the up-coming season was evident as he explained he believes this year’s squad will be even more dangerous from the plate than they were last year when they finished third in the TVC in runs scored. “We’re going to hit the ball harder this year. We’re going to hit better one to nine, and we’re going to have more girls challenge the fences one to nine with this group,” Kouns said. “We’re still going to maintain that mentality of doing what we need to do to score runs, but we’re going to turn them loose and let them swing a little more this year.”

Kouns acknowledged that the TVC is one of the best softball leagues in the state saying, “We play in probably the deepest and toughest softball league in 4A in the state. If we take any weeks off we’re going to be in trouble, but if you get through that schedule you’re battle-tested and you expect to beat good teams.” Berthoud intentionally stacked their pool with the best teams possible for the annual Spartan Classic in early September, hoping not only to challenge themselves and improve, but also boost their RPI with an eye on getting a more-favorable seed for the postseason.

The Lady Spartans will take to the field for their first game on Aug. 22 when they welcome TVC rival Mead to Bein Field in Berthoud. First pitch is scheduled for 4 p.m.