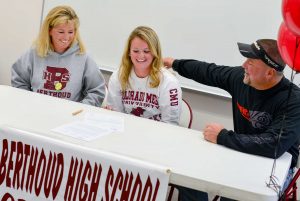 Berthoud’s Jessi Boruff and her parents, Sandi and Doug Boruff, react after Jessi signed her letter of intent to play softball at Colorado Mesa University in Grand Junction, on Nov. 12 at BHS.
John Gardner / The Surveyor

The question wasn’t if Berthoud standout softball player Jessi Boruff would play college softball, but rather where she would play.

Boruff, who lettered in all four of her softball seasons at BHS, caught the attention of Mesa coaches on the recruiting trail at an All-Star game last year where she belted two homeruns. Asked about what Mesa liked about her, Boruff explained, “They said they like my bat, they think I can be an impact player.”

An impact player was precisely what Boruff was throughout her career with the Lady Spartans. In her four seasons on the Berthoud squad, Boruff compiled a .464 batting average, slugged .790 and posted a sky-high OPS of 1.324, according to Max Preps. She tallied 43 extra base hits, including 13 homeruns and committed only three errors in 92 total chances in the outfield.

Boruff is a two-time All-Conference player and this past season was elected to the Colorado High School Activities Association’s All-State first team. It was hardly a surprise to see Boruff selected to the All-State team in a season where she posted a stat line of .522/.616/1.014 with six homeruns, 10 doubles, 33 RBIs and eight stolen bases.

Boruff’s contributions helped propel the Lady Spartans to the postseason in each one of her seasons on the team. The memories of playing for all the marbles in State is one of the things Boruff said she will remember most about her softball career at BHS.

“Last year when we went to state, we played Mullen and we beat them barely, and I made this catch over the fence to sort of save the game, that’s one thing that will always stick with me, it was great,” Boruff said.

She talked nostalgically about how a high school athlete’s career comes full-circle in just four short years, describing how she began as a shy freshman who “didn’t talk a lot” but eventually came out of her shell and grew into a leadership role on the team.

“This last year, having the freshmen look up to me was really rewarding,” she said. “It really made me push myself to get even better because I knew they were watching me.”

As she prepares to take the next step, Boruff fully understands the hard work that will be required, not only as a college athlete, but academically as well. She plans to study business at Mesa and said that, as important as softball is to her, her studies will come first.

“My main priority is school, making sure to do my classes,” Boruff said. “I’m going to take [to college] what I learned here about working hard and always pushing myself to be better.”