Nothing in life is easy. 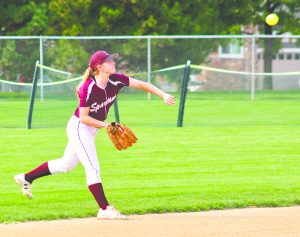 Photo by Tiffany Rafferty –  Berthoud outfielder Tristan Pope fires a ball back into the infield after catching a pop fly at the Spartan Classic. The Lady Spartans won three of four games at their namesake tournament.

Playing in the annual Spartan Classic Invitational at the Barnes Softball Complex in south Loveland, the Berthoud High School (BHS) softball team won three of their four games over some stout competition. After battling hard and coming up short by a 3-1 final against Strasburg in the opening game, the Lady Spartans reeled off three-straight wins by besting Rifle by a 7-4 final Friday afternoon and topping Cedaredge 10-8 and Golden 8-7 on Saturday. soft

“The three wins was huge, winning three games was gigantic, hopefully it’s turning us in the direction we need to be turned,” a pleased Berthoud Head Coach Buddy Kouns said at the tournament’s conclusion.

After falling to Strasburg, Berthoud had given up the lead entering the final inning against Rifle. Trailing 4-3 in the sixth, the Lady Spartans rallied, pushing four runs across the plate in their half of the frame while starting pitcher Sarah Jorissen kept Rifle off the board to preserve the three-run win. Junior Sophie Supernor had two hits for Berthoud and senior Sedona Cook, who leads the Lady Spartans in both batting average (.531) and runs scored (17), drove in a pair.

Saturday provided games with Cedaredge and, what was a rematch from the 2016 Regional Championships, a late afternoon affair with Golden. Even though four of the first seven Lady Spartans to enter the batter’s box got hit by pitches from Cedaredge’s Summer Young, Berthoud was only able to scratch out one run in the first two frames. The Lady Spartans bats came alive in the third inning as they pushed three runs across the plate, all with two outs.

Supernor notched a single to score Ashlynn Balliet and came home herself along with Natalie Fisher when sophomore Jordan Schachterle cleared the bases with a double. Berthoud added another five runs in the fourth, the big bang coming with a bases-loaded double off Fisher’s bat.

Despite trailing 10-2 entering the final inning, the Lady Bruins refused to go quietly into the sweltering summer afternoon. A tape measure homerun over the left field fence from Katie Hyke got things started for Cedaredge, two Berthoud fielding errors and three more hits from Cedaredge followed to shrink Berthoud’s lead to just two runs. Yet Jorissen was able to induce back-to-back soft grounders in the bottom of the sixth to squash the Lady Bruins’ comeback attempt.

In the final game of the weekend, Berthoud and Golden battled to a 5-5 tie after three innings. The Lady Spartans had chances in both the fourth and fifth innings to take the lead, but in both frames a two-on, one-out situation ended without any runs. Things changed in the top of the sixth when Cook and Addi Spears led off the frame with back-to-back singles. Jorissen drove both in with a double that dropped just inside the right field foul line, an opposite field hit that tied the game at seven.

“It was coming in from outside and I used to not be able to hit outside so I’ve really been really working on the outside pitch and I saw it going outside and I knew I had to drive it that way because we had people on base and I knew driving it oppo would bring them in,” Jorissen said of her game-tying hit.

The junior would score the winning run of the game for Berthoud when her battery mate, catcher Mandi Laib, singled with two outs. Again, it was good pitch recognition that provided the scoring opportunity for Berthoud. Said Laib, “I saw it coming in inside, I knew how to turn on it and pull it and it went right down the line where she couldn’t make a play on it. I’m able to see (pitches) well after catching for seven years so I can hit ‘em where I need to put ‘em.”

“It honestly gave us a confidence booster; we know we had to believe in each other and believe in ourselves and we all came together I felt like more this weekend than we ever have,” Jorissen said. “I think it will help us more for the rest of the season because we know how to play together and we have confidence in each other.”

The hope for Berthoud is that the strong showing in their namesake tournament will help begin to repair what has become a fractured team.

Kouns was pained as he described the acrimony that has enveloped his squad, saying, “This is the first year I’ve had this kind of magnitude of what we’ve got going on. When it’s on your watch and you’re doing everything you can, it’s heart-breaking when that’s happening.”

According to Kouns, “(the) issues have been addressed and are still in the process of being addressed. You want young people to be getting joy out here; this shouldn’t be a miserable place to come, for anyone, and there’s not been a lot of joy here and we’re not out of the woods. I’m trying like heck, and I’m trying to make the right decisions, and I’m trying to protect 19 kids … and, yeah, there’s a few of them stepping out of line.”

Jorissen explained that while the team has gone through some rough patches, things are on the upswing. Asked specifically about team chemistry, Berthoud’s junior pitcher said, “It’s getting there, it’s pretty good right now, there’s a few ups and downs a couple weeks ago, but we’re still fixing it and, I mean, it’s still pretty good, like we all get along really well and we play together really well, so it still works.”

The team’s internal issues have, according to Kouns, bled onto the field where Berthoud has had an up-and-down first half of the season and currently find themselves at 6-5 overall with a 2-4 mark in conference play. “It’s what’s created where we are, but I’m going to tell you what, I’m more concerned about the well-being of my kids than I am about our season and it being off the rails, that’s where my concern is.”

“This is a huge win for the girls and I hope that it will bring them together,” Kouns said after the conclusion of the Spartan Classic. Berthoud will begin the second leg of their Tri-Valley Conference schedule when they travel to Mead on Sept. 14.