Patience is a virtue.

In the opening game of the 2018 season, the Berthoud High School softball team showed they possess patience in droves. Berthoud worked 13 walks on the night as they steam-rolled past Thompson Valley by a mercy-rule shortened 16-1 final Monday evening at Bien Field. 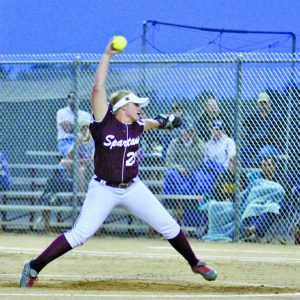 Photo by Tiffany Rafferty – Berthoud’s Sarah Jorissen winds up for a pitch against Thompson Valley Monday night at BHS. Jorissen pitched splendidly for the Lady Spartans, allowing only one run and striking out five Eagle batters to get her first win of the 2018 season.

With Thompson Valley’s ace pitcher Makenna McVay unable to pitch due to injury, the Lady Eagles find themselves scrambling to fill an enormous void at the critical position. Three Thompson Valley pitchers stepped in the circle on Monday night and, despite valiant efforts from each, all three were almost entirely ineffective. The combined line for the trio? Thirteen walks, three passed balls, five wild pitches and 16 runs allowed.

“It’s very hard to adjust. You never know what’s coming at you, but that is part of the game; it helps teach us how to control our bat speeds and what pitches to take. It’s really a good learning experience,” said Berthoud’s Ashlynn Balliet. Despite the ineffective wildness of the opposing pitchers, Balliet blasted a solo homerun deep over the left field fence in the second inning and added a single in the third.

“That was my favorite pitch by far, and I wasn’t going to let anything like that pass by. I just gave it all I got,” Balliet said of her homer. “Usually I’m waiting for that pitch in that spot.”

Berthoud Head Coach Buddy Kouns was obviously pleased with the win, saying it should certainly give his squad a boost of confidence to begin the season, but was equally unsurprised with the final result.

“What I told the girls after the game is they did to them what we should have done to them. We took care of business in an efficient, quick way,” Kouns said. “It’s very important; these are setup games. We play them for a reason. It should be a confidence builder.”

Berthoud got a polar-opposite performance from their starting pitcher, senior and two-time All-Conference selectee, Sarah Jorissen. After giving up a homerun to McVay, who can contribute at the plate despite her injury, to leadoff the game, Jorissen was virtually lights-out the rest of the way. She allowed one more hit after the homer, a seeing-eye single to Autumn Porter in the first and gave two free passes, but did not allow anyone past second base and fanned seven in her four innings of work.

Berthoud’s patience at the plate in the face of the erratic pitches thrown their way was demonstrated up and a down the order. Jorissen walked three times, while Carly Rafferty and Mandi Laib each got a free trip to first base in two of their three plate appearances. Sophie Supernor joined Balliet in notching two hits in the game, and junior Jordan Schachterle led the Lady Spartans with three RBIs.

As Balliet explained after the game, notching a big win over a familiar foe was the perfect way to begin a season where the Lady Spartans have aspirations of returning to state playoffs after having come up short last year. “It was definitely a good feel in the dugout to know we’re going to be a strong team, and it’s going to be hard to knock us out” the junior said. “When we got knocked out last year it put gasoline on the fire knowing that we want to get to Aurora. That is our main goal this season … we want it bad this year.”

Berthoud will face a stiff test Thursday afternoon when they face off with 5A Loveland High School at the Centennial Ballfields in Loveland. The Lady Spartans will then play their first Tri-Valley Conference game of the year on Tuesday, Aug. 28, when they head to Johnstown to take on Roosevelt.