Being able to win games in different ways is one of the hallmarks of a great team. Over the course of the last week, the Berthoud High softball squad has won both in blow-out fashion and, most recently on Tuesday night, by earning an incredibly hard-fought 2-1 win in extra innings.

Last Wednesday, Berthoud stomped rival Thompson Valley by a 12-2 in final the teams’ annual under the lights game and on Friday dispatched Peak to Peak with ease, 11-3. Yet it was the win at home Tuesday night against Severance, where Berthoud took the game by a 2-1 in nine innings, that put the exclamation point on the Lady Spartans’ now five-game winning streak.

The significance of winning a close, low-scoring game was not lost on Berthoud Head Coach Buddy Kouns who said after the game, “I think it can be a defining moment, now we see how we respond to it, we gutted it out, everyone here gutted it out, that young lady, Masen Premer, that’s a freshman that got that base hit up the middle and stole second base. That’s as fun of a victory out here as I’ve ever had here, it was awesome.”

The game featured a matchup of two of the best pitchers in all of Class 4A as Berthoud sophomore Cemryn Pickett went toe-to-toe, pitch-for-pitch with Severance senior Natalia Puchino.

Severance struck first, scratching out a run on a single, a walk and two passed balls in the second inning to take a 1-0 lead. A terrific play in the field by freshman shortstop Masen Premer to cut down Puchino, who singled to lead off the frame and advanced to scoring position on a sacrifice bunt, at home plate prevented Berthoud’s visitors from taking a larger lead. 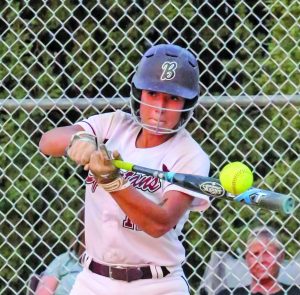 Photo by Angie Purdy – Berthoud’s Gracie Flores hits a double down the left field line to bring home Masen Premer to give the Lady Spartans a 2-1 win in extra innings. Berthoud has won five straight games and will play in the annual Spartan Classic tournament this weekend.

That run was the only one that Pickett would allow in her nine innings from inside the circle. Berthoud’s superstar sophomore dealt with traffic on the base pads throughout the game but proved able to routinely work her way out of each jam thanks to a fanning a whopping 15 Severance batters.

“In games like this, you have to make sure to keep your walks down and make sure things are going smooth and I just kept reminding myself that I could do it the whole time and remind myself of what I need to do, what my job is, to get it done for the team,” Pickett said after picking up her seventh win of the season.

Berthoud’s ace faced two-on with zero outs in the sixth inning and escaped by inducing a ground ball and striking out two. She got out of a two-on, two-out jam in the seventh with a soft pop fly that she herself caught. In both the eighth and ninth extra innings, with the pressure cranked up to the max, she twice got of two-on, one-out situations with a combination on strikeouts and ground balls that the Berthoud defense fielded in textbook fashion.

Puchino was equal to the task, recording 19 strikeouts in the contest with her lone hiccup before the final inning coming in the home half of the fourth frame. Junior Gracie Flores led off the frame with a double, advanced to third on a sacrifice bunt from Pickett and scored on a sacrifice by Allie McCrea to knot the score at 1-1.

In the bottom of the ninth, the Lady Spartans had their chance. Premer, batting ninth, laced a single right up the middle and stole second base on the first pitch of the next at bat. Flores then came to the plate with a chance to drive in the winning run and she delivered, depositing a Puchino changeup over the head of Degan Fry at third base and down the left field line, allowing Premer to cruise home without even a chance for a play at the plate.

“I knew she was going to try to jam me because that’s what she did my last at-bat, she threw me two inside,” Flores said was her thought when getting in the batter’s box in the ninth inning with the game on the line. “My first pitch was inside and I knew I didn’t want that and then I saw her make a pitcher’s mistake, she gave me a changeup and I knew I didn’t have to swing hard, I just had to tap it.”

Kouns was understandably pleased with the win and noted the team’s only obstacle this season has been themselves saying, “We’re 7-3 right now and, at 7-,3 the three losses we have we put on ourselves. I told them after the game tonight that the only team that has beat Berthoud this year is Berthoud, and if we will play clean, and we play smart, we’re going to be really hard to beat.”

Berthoud (7-3) will travel to Thornton to take on undefeated Riverdale Ridge (8-0) this Thursday and will then play four games in Loveland at the annual Spartan Classic – one the state’s premier high school tournaments – on Friday and Saturday.