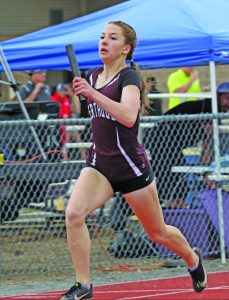 Photo by ACP Media – Berthoud’s Maddie Kenner sprinting through her leg of the 4×200 relay race last week at the R2J Invitational at BHS.

The Berthoud High School track team competed last week at the R2J Invitational held at Max Marr Stadium. The meet was originally scheduled for Saturday, but 50 mph winds forced the postponement of the meet until Monday.

Several events were held on Saturday before the meet was called. The girls 800-meter medley relay team of Gabby Staley, Sydney Hardy, Ellie Harper and Ava Reed placed third behind Roosevelt and Silver Creek. Anndee Davidson (seventh place), Addison Kapaun (tie-12th) and Kara Wilson (tie-12th) competed in the high jump despite the bar having to be held on by the spotters until the last possible moment because the wind kept knocking it off.

Scott Clark (third place) and Julian Rayon (14th) both managed to run personal best times in the 3,200 meters, despite the strong wind. The breeze may have helped Izabelle Froien (third) who set a new personal best throw by 13 feet in the girls discus. Katie Rafferty (15th) also had her best throw in the wind. Darin Davidson (14th) also tied his personal best jump for the year in the long jump. While Jayden Nohr (third) continued to be consistent in jumping over 20 feet in the same event. While the weight of the shot put is heavy enough to not be very affected by the wind, the dust blowing into the eyes of throwers Kaden Sandvik (12th), Josh Biddulph (18th) and Easton Armitage (20th) was something to overcome.

Jayden Michaelis was fourth in the 110-meter hurdles and third in the 300-meter hurdles. Michaelis, Jayden Nohr, Braedon Moore and Kamron Hosier won the 4×100-meter relay in a season best time and they placed fifth in the 4×200-meter relay. Nohr also placed third in the long jump and sixth in the 200 meters. Hosier was fifth in the 200 and seventh in the 100 dash. There was a Berthoud battle in the 800 meters as Derek Rennaker went out hard and fast. Scott Clark and Afton Cooper gave chase but could not catch Rennaker who placed second. Clark (third) and Cooper (fifth) ran season best times. These three combined with Jesse Hatton for fifth in the 4×400 relay. Tate Bothun (fourth) and Daniel Hatton (sixth) paced off of a strong field in the 1,600 meters. Trevor Moore (fifth) and Easton Armitage (ninth) both threw season best distances in the discus.

The team was supposed to compete in the Randall Hess Invitational last Friday, but the meet was postponed due to high winds, just like the R2J Invite had been. The Spartans will see how they match up in the Longs Peak League Meet on Friday and Saturday at Longmont High School.