Berthoud Basketball So Close but So Far 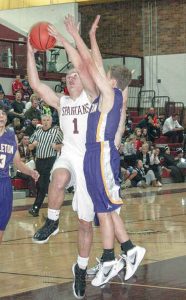 Berthoud’s Karsten Bump goes up for a shot against a defender during a recent
game against Littleton at Berthoud High School.
Angie Purdy/ The Surveyor

Berthoud High School (BHS) boys basketball coach Mike Burkett knows his team has both the physical skills and the smarts to compete at a high level. Now it is just a matter of convincing the team of that.

Hosting Littleton in the game two of the Spartan Classic on Dec. 9, Berthoud battled through some sloppy play through the first three quarters but rallied late to eventually tie the game at 39-all with just seconds remaining. Yet on the final possession of the game, Littleton senior Sam Kail took the inbounds pass and drained a shot from near-center count to give the visiting Lions a 42-39 win. “That was an amazing shot, I give all the props in the world to him,” Berthoud senior Noah Purdy said of Kail’s game-winning shot. Purdy scored 19 points for Berthoud on the night, 17 of which came in the second half.

The game prior, Berthoud fell by an 86-50 final to Mountain View as the visiting Mountain Lions made 12 three-pointers. In the final game of the weekend, the Spartans allowed a 13-6 first quarter lead evaporate and lost by a 40-35 final tally to Thornton-based Sky View High School.

Littleton took a five-point lead into the fourth period but extended it to nine, 37-28, with just 2:08 left in the game. That’s when the Spartans’ offense came to life. Purdy attempted a lay-up that was blocked, but he got the rebound, pivoted and made a lay-up. On the next possession he stole the ball and drained one from beyond the arc. That he followed with another lay-up as Berthoud’s defense clamped down. Then a lay-up from senior Karsten Bump cut Berthoud’s deficit to just one. Purdy then scored yet again, knotting the game at 39-all.

“We said there is one guy on their team who can hurt us and we let him hurt us,” a disappointed Burkett said after the game when asked about Kail’s miraculous trey. “It wasn’t just one shot; we just didn’t come to play for 27, 28 minutes of the game.”

Purdy’s play in the second half of the game with Littleton was exactly what Burkett has been looking for out of the senior and team captain. “That’s the Noah Purdy we’ve been looking for since we started this season, we issued a challenge to him … he and I had a little talk yesterday and I said that’s how he has to play night in and night out and that’s a positive we can take from this,” Burkett said. “I told him I was proud of him.”

“I feel like my team needed a leader to take on the road we had ahead of us, I just wanted to take over,” Purdy said. “I wanted it, I wanted the team to want it, I had to do what I had to do. We know how to compete, we can fight with anyone, we can come back from a big deficit.”

Burkett remains convinced that his team can play as well as they did in in the final minutes of the game against Littleton, it is just a matter of putting it all together for the full 32 minutes. “We don’t have one kid who’s going to go score 30 points every night, but we need is a little bit here, a little bit there and this team can win some games,” Burkett said.

Berthoud (1-6) will host Niwot on Dec. 16 and Thompson Valley on Dec. 20 to close out the pre-holiday break portion of their schedule. The Spartans will begin TVC play after the break when they welcome Erie to the BHS gym on Jan. 3.