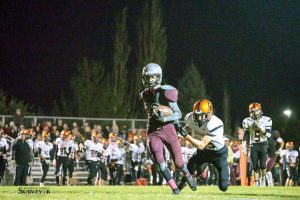 Berthoud wide receiver Jackson Hall eluded an Erie tackle and went on to score the Spartans’ go ahead touchdown after receiving a pass from Cody Braesch in the second half of
last Friday’s game versus Erie at Max Marr Field at Berthoud High School.
John Gardner / the Surveyor

There is perhaps nothing that contributes more strongly to building character than responding to and overcoming adversity. That is as true in team sports as it is in everyday life.

Having won their first four games by a combined score of 147-7, the Berthoud High football team was not one that had faced much in the way of adversity this season. Yet that was bound to change. It did, in a big way, on Oct. 2 at Max Marr Field.

Berthoud battled not only a stout Tri-Valley Conference rival but also less-than-ideal weather conditions on the wind-swept and rain-soaked field. Additionally, the Spartans emerged from the locker room at halftime finding themselves trailing for the first time all season, 14-12, and Berthoud responded by assembling what could eventually come to be viewed as a season-defining scoring drive.

With 4:09 remaining in the third quarter, Berthoud marched 95 yards – the vast majority of which came via passes from quarterback Cody Braesch to receivers Jackson Hall and Wyatt Woodrick and tight end McCallan Castles – converted three times on third down, including a third-and-22 pass to Hall for 35 yards, a touchdown, and a lead they would not relinquish for the 12 minutes and change that remained on the clock.

“That’s what we spoke about at halftime, we are in an adverse position we haven’t been in yet and, if we’re going to be the team that we want to be, how do we respond?” Berthoud Head Coach Troy Diffendaffer said following the game. “My guys responded exactly the way we want them to; they dug down deep, they made plays when they had to.”

Sixty-seven of the drive’s 95 yards came on five Braesch-to-Hall passes as the pair of seniors look to be hitting midseason form. Hall finished the night with a season-high 13 receptions, 147 receiving yards, and three scores in what was his, and Braesch’s, best game of the season.

“I think it’s just us playing together, we’ve been around each other for so long and we know that if one of us gets down or we get down in general we’re going to come out of it,” Hall explained. “We know that we’re going to win even if we’re down, even if we make mistakes.” 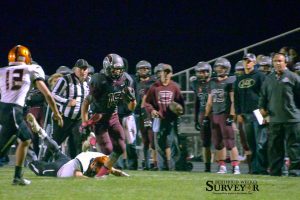 Hall’s sentiments were echoed by Braesch, who said, “I think it was a huge win, we all kind of knew coming into this game it was going to be a tough one. The fact that everyone stepped up, especially in that second half, and didn’t give up and fought … is going to be a huge confidence booster for everyone.”

The weather conditions caused some hiccups early in the game with some dropped passes and players losing their footing. Yet the Spartans were able to adjust, mixing in the running game – Braesch as well as tailbacks Jimmy Fate and Karsten Bump, combined for a 137 yards on 28 rushing attempts – with a passing attack that kept the Tigers defense off balance throughout the game.

Berthoud jumped out to a 12-0 lead in the opening minutes of the second quarter when Braesch read that Erie was going to blitz on a fourth-and-goal from the 15 yard line and took advantage of the one-on-one coverage on Hall on the outside, throwing a perfect pass to the back corner of the end zone for the score.

Even after re-taking the lead in the waning seconds of the third quarter, the Spartans faced more adversity as a turnover deep in Erie territory took away, not only a chance to take a two-score lead with just under three minutes left in the game, but afforded the Tigers one last chance to mount a scoring drive and steal the win.

Erie drove nearly the length of the field, converting when they needed to and using their timeouts wisely. On a last-ditch effort to remain alive, an Erie pass on fourth-and-20 from the Berthoud 28 was swatted down by senior safety Max Bump, ending the Tigers’ hope for a come-from-behind win.

“Max did a great job playing centerfield there; he saw the quarterback’s eyes and the receiver coming across the middle and he made a great break on the ball,” Diffendaffer said.

A kneel-down by Braesch from the victory formation preserved the win and Berthoud’s undefeated record.

“We need to win this type of game for a couple of reasons: one being the closeness of the game, over-coming the adversity and stuff like that, but then also because of the weather conditions. Being able to run the ball when we need to run the ball against the fronts we see, being able to execute in the weather conditions we see,” Diffendaffer said. “We live in Colorado, it’s not going to be 80 and sunny the rest of the way.”