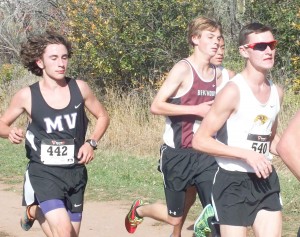 Berthoud’s Luke Spitz, center, runs in the middle of the lead pack at the Region 4 cross country meet on Oct. 16. Spitz finished fifth and qualified to the state meet that will be held on Oct. 25 at the Norris-Penrose Event Center in Colorado Springs.
Photo courtesy of Lisa Spitz / The Surveyor

In order to reap the benefits in October, the hard work begins in June for cross country. Just ask Luke Spitz, Elijah Grewal, and Kiah Leonard about the days of training that went into preparing for the season by running when peers are enjoying the lazy days of summer. The trio will profess that the hard work throughout the past five months, though not easy, has been worth it, as they qualified to the Colorado High School Athletic Association state meet by finishing in the top 15 at the Region 4 cross country meet on Oct. 16.
The Thompson School District is very well represented at the state meet. Out of the 30 athletes who will represent Region 4 at the state meet in Colorado Springs on Oct. 25, 19 runners are from TSD schools: Berthoud, Mountain View (MVHS), and Thompson Valley (TVHS).

The boys were the first to race at Regionals. The leaders included Jarrett Thollot and Kaleb Simington of TVHS, Peter Franklin and Julian VonHolten of MVHS, Sean Kilcullen of Longmont and Berthoud’s Luke Spitz. Spitz ran faster than he ever has on the course and finished in fifth place, just 11 seconds behind Thollot, the eventual winner. At the first mile, Grewal was in 24th place and didn’t look to have any chance of qualifying to state. However, Grewal kept focused and continued passing runners until he finished in 12th place, earning an individual berth to state.

Berthoud’s Ken Kubik, Aiden Colton, Murphy Zimmerling, Zac Marquardt and Ty Williams were focused on competing at their best to be one of the top teams; the boys’ team finished in fifth place. Unfortunately for Berthoud, only four teams qualify to the state meet and Berthoud wasn’t one of them.

The girls were up next and the scene was very similar to the boys’ race.

Lauren Offerman and Riley Cooney of MVHS started with a very fast pace. Leonard dropped back to sixth place behind Kendra Larson, Emily Leidig of TVHS and Mikayla Gaffney of Silver Creek. But Leonard didn’t give up, fighting back to the front of the race and eventually overtaking everyone except Offerman and Cooney, for a third-place finish. Leonard and Gaffney were the only top-10 finishers not from TVHS or MVHS.

The two Loveland schools tied for the team competition and MVHS won on the tie breaker.

Spitz, Grewal and Leonard will race at the state meet on Oct. 25 at the Norris Penrose Equestrian Center in Colorado Springs.

The boys were the first to race and Luke Spitz, along with two runners from Erie, Shane Mathis and Sean Fitzgerald, separated themselves from the pack early in the race. Spitz kept pace with Mathis through the first mile, but the Berthoud senior could not maintain contact on the hill climb during the second mile of the race. During the rest of the race, Spitz settled for second place in 17 minutes, 23 seconds, Berthoud’s highest finish by a male in the Tri-Valley Conference meet.

The next two Spartans, Ken Kubik and Aiden Colton, hung on to the back of the second pack of runners coming through the mile mark. Working together, the two started moving up through the crowd at the second-mile mark. Thundering through the last mile, Kubik and Colton passed at least 10 runners to finish in 13th and 14th place, earning All-Conference Honorable Mention awards.

Zac Marquardt ran his second fastest time of the season of 19:54 to place 32nd. Berthoud’s final scorer was freshman Murphy Zimmerling who finished in 50th place with a time of 20:31. The boys’ team finished the day in third place behind Erie and Holy Family.

“This was a good effort today. We ran without our number two and three guys and still finished third on the boys’ side,” said assistant Coach Craig Greenslit.

Greenslit touched on competing with Elijah Grewal and Josh Doyle out due to injuries.

“With Elijah and Josh healthy, we will be ready to qualify for state at Regionals next week,” Greenslit said.

In cross country, state qualifying is determined solely by placement at the regional meet. The top four teams and the top 15 individuals at the meet in Lyons on Oct. 16 qualify for the state meet.

On the girls’ side, Berthoud’s Kiah Leonard was expected to literally run away with the girls’ race, coming in with a time two minutes faster than any other girl; but apparently no one told Isabelle Hren from Holy Family. Hren, a freshman, stayed with Leonard through the first mile and a half. Surprised to have someone on her shoulder for such a long time, Leonard took advantage of a long hill climb and pushed the pace, dropping Hren and ultimately crossing the line 30 seconds ahead of Hren, with a time of 19:19. The race ended Leonard’s high school career, never being beaten by an athlete in the Tri-Valley conference in cross country in any race.

Berthoud’s Sonya Schuppan finished in 23rd place at 22:49 after unleashing a powerful kick in the final quarter mile, passing six girls, including teammate Josie Spitz who finished 27th at 22:53. Jessen and Sara Godfrey were close behind in 31st and 32nd with times of 23:15 and 23:17, respectively. Jessen ran her fastest race of the season, even though most considered this course more challenging than other courses the team has run.

Berthoud’s Courtney DeMoudt injured her ankle in the first mile and struggled to finish at 37th place with a time of 23:37. Eppler was close behind her in 39th in 23:48. Freshman Alyssa Radloff set a new personal best of 24:41, finishing in 58th, and foreign exchange student Axa Lares finished in 85th place at 27:05.

Holy Family won the girls’ competition but is not in the same region as Berthoud. However, in order to qualify for state, the Lady Spartans will have to beat Mead and Windsor who also beat them at conference.