What a difference a year makes.

In their opening game of the season, the Berthoud High School (BHS) football team proved this season’s squad is light years better than 2016’s. Playing District 6 Stadium, Berthoud dominated Greeley Central in all phases of the game on their way to a resounding 43-7 win. 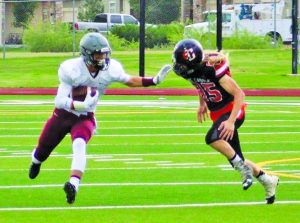 The Spartans scored on the ground, through the air, forced three Wildcat turnovers, sacked the opposing quarterback three times, had 68 yards on five punt-and-kick returns, and Berthoud placekicker Ryan Schmad was a perfect five-for-five on extra points.

Berthoud got contributions from up and down the roster, with quarterback Brock Voth turning in a particularly strong performance. The senior signal-caller was highly efficient as a passer, finishing the night 14 for 21 for 217 yards and three scores he spread between senior Jake Rafferty and juniors J.T. Lozinski and Danny Pelphrey. Voth finished the game with a stellar 140.3 passer rating and led the Spartans with 109 rushing yards and two touchdowns on 19 carries.

Lozinski also turned in a stellar game on offense, leading the Spartans with 216 all-purpose yards (82 receiving, 66 rushing, and 68 in the return game) and finding the end zone twice. Ty Beaman had two sacks and Anthony Trojahn had another as part of his team-high nine tackles as well as an interception. Austyn Binkly also picked off a Wildcat pass for Berthoud.

Rafferty got the scoring frenzy started for Berthoud when he reeled in a two-yard touchdown pass from Voth with 27 seconds left in the first quarter, a play that was set up by a 46-yard reception Lozinski reeled in. Lozinski got Berthoud on the board next with a one-yard touchdown catch to give the Spartans a 14-0 lead with 8:14 remaining in the second quarter.

Central got their only points of the night on the next possession with a two-yard run from senior tailback Brett Yackey, but after that it was all Berthoud. Lozinski crossed the goal line on a four-yard run to put Berthoud up two scores, 21-7, with just over five minutes remaining in the opening half. Pelphy hauled in a 10-yard catch from Voth for Berthoud’s fourth touchdown of the night and then Voth scored a pair with his legs with runs of 53 and 19 yards to put another two-touchdown exclamation point on Berthoud’s first win since last October.

Berthoud Head Coach Troy Diffendaffer explained before the season he and his staff’s heavy team-centric approach, “We’ve been preaching the true definition of team, where they say the whole is great than the sum of the parts … and the kids are really buying in.” One game down, the approach appears to be working well.

Berthoud (1-0) will play their home opener on Friday, Sept. 8, when they welcome Lutheran High School (0-1) to Max Marr Field at BHS. Kickoff is scheduled for 7 p.m.