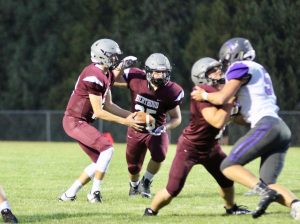 Photo by Tiffany Rafferty – Berthoud quarterback Brock Voth hands off to tailback A.J. Anema while Caleb Kelly blocks his man out of the play. Berthoud won their second game of year, 47-25.

In every game there is a defining moment, or defining sequence, that alters the course of the game and almost always has an out-sized impact on the outcome.

The Berthoud High School (BHS) football team had one of those sequences Friday night as they bested visiting Lutheran by a 47-25 final in their home-opener at Max Marr Field. Berthoud came out of the locker room at halftime with a 26-10 lead and, after recovering a Lutheran fumble on the second-half kickoff, appeared poised to score their fourth touchdown which would have put the contest out of reach. Yet, after driving inside the Lutheran 10-yard line, the Spartans put the ball on the ground. The following play Lutheran tailback Aaron Holdridge took a swing pass and scampered 97 yards for a touchdown.

The 14-point swing in the opening minutes of the second half could have pushed momentum in the Lions’ favor. But it did not. The Spartans did not hang their heads, they re-grouped and scored twice more in the next 10 minutes of game time to take a commanding 40-17 lead with 11:52 left in the game.

Berthoud’s response to the unfortunate sequence at the opening of the second half left Head Coach Troy Diffendaffer highly pleased. Said the fourth-year head coach, “That could have been a big back-breaker for us, and we are just so pleased right now with how these young men, faced with an adverse position, a swing in momentum, and they don’t fold the tent up and head out of town, they find a way to battle back.”

Diffendaffer explained he and the coaching staff did not have to spend time bucking-up their squad as the team knew exactly how to respond. “We didn’t say a thing, the kids did, they said, ‘Hey, we’re going to be okay, defense said, we’ll stop them again, offense said, we’ll get the ball back and get it in,’ and they believe in themselves right now and that’s what’s really good,” Diffendaffer said.

Berthoud quarterback Brock Voth, who turned in his second 300-plus yard, four-touchdown effort in as many tries, explained, “We found a way to fight through it just like we do in practice when we’re having to do heavy conditioning, running 40s and 20s all the time. It’s huge, if someone messes up you know your brothers have your back. No matter what happens you have support behind you.”

Voth connected twice for scores with senior receiver Ryan Schmad, the first on a lob to the left corner of the end zone that gave Berthoud a 12-3 lead and the second coming on a third-and-14 deep in Berthoud territory where Schmad took a pass over the middle, split the Lutheran safeties and galloped 84 yards for the score. Explained Schmad, “In film we had prepared for a play like that, their safeties didn’t always follow us so when we saw that look we knew we had the play and it worked out for it, it was exhilarating!”

Schmad is just one of a litany of weapons Voth has at his disposal. Six different Spartans caught passes on the evening with junior Danny Pelphrey’s six catches for 117 yards and one score pacing the Berthoud receiving corps. Cooper Stratmeyer led the ground attack for Berthoud, gaining 72 yards on 12 carries and finding the end zone twice.

The skill position depth Berthoud boasts gives the team the luxury of being able to keep fresh players on the field throughout the game. Explained Diffendaffer, “The way we run our tempo, being able to platoon those guys, in years past when a one came out and we put in a two in there was huge drop in skill set, now all of our kids have worked hard all summer long and the skill sets are pretty even, we pull one out and we’re not losing too much.” Voth described it as, “really relieving, because if the defense takes one person away we have plenty others.”

The long run from Holdridge and a late garbage-time touchdown was about all Lutheran was able to do offensively as the Spartans had more than adequate speed to counter the Lions’ spread offense. Ty Beaman and Levi Decker each recorded three sacks in the game, and Conner Balliet added another. Schmad snagged an interception to end a Lutheran drive midway through the second quarter and Anthony Trojahn paced the Spartans with a whopping 18 total tackles.

Berthoud (2-0) will play their annual homecoming game when they welcome Centaurus (0-2) to Max Marr Field at BHS on Friday.