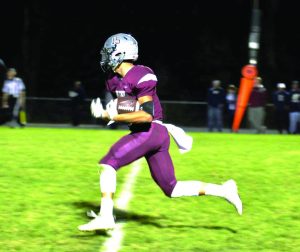 Frederick High School (FHS) travelled to Max Marr Field on Friday, Oct. 20, to take on the Spartans, and went home with a 21-24 win. After beating the Warriors last season, BHS looked to earn a much-needed Tri-Valley Conference win, but the Warriors were a changed team this year.

Head Coach Troy Diffendaffer touched on the subject, “It was a brand new Frederick team, and they have a brand new coach this year, and they’re playing with a lot of confidence. So, we had to go at it like it was a team we’d never faced before at all.”

Berthoud looked to fire back with a 47-yard kick return by junior Jake Lozinski, but were forced to punt on Fredrick’s 38-yard line. Frederick took the opportunity and made the best of it.

The Spartans defense looked sharp with a blocked pass by senior Jake Yuska, but they couldn’t quite come up strong when FHS scored a 13-yard touchdown. After an extra point, the Warriors were shutting out BHS 10-0 with 7:57 left in the second.

BHS wasn’t ready to give up, as senior Wyatt Woodrick rushed for three first downs to push his team on a 73-yard drive. The drive ended with a 25-yard touchdown pass to Lozinski. With an extra point by senior Ryan Schmad, Berthoud was chipping away at the Warriors’ lead, bringing it down to only three points.

The Warriors continued to find holes in the defense, putting up another touchdown, ending the first half with a 17-7 lead.

Scoring let up again in the game until 4:54 left in the third when FHS put up another seven points after a Spartan fumble on their two-yard line.

The Spartans kicked it into high gear after this score, travelling down into the red zone. They narrowed their deficit on a fourth-down touchdown pass between seniors Brock Voth and Jake Rafferty. The Warriors’ lead was cut down to only 10 points at the end of the third.

Berthoud’s battle continued with a pace-changing interception by free safety Miguel Sarmiento. The junior picked the pass on a third-and-nine giving his offense the ball just 35 yards away from the end zone. This pick gave Berthoud a huge push to get back in the game.

Said Sarmiento, “Honestly, I had no idea what I was doing at the time; the ball just came to me and I was excited that we had a chance to win this game.”

“I think that got our defense really hyped up and our offense did score after that interception. We just didn’t have enough time to stop them,” the junior free safety added.

The interception led to a four-yard pass from Voth to Schmad who soon after kicked the extra point to put the Spartans down just three.

With only 5:31 left in the game, it wasn’t enough for BHS to get the points on the board to finish the night with a win.

Diffendaffer said, “The biggest thing was we needed to take care of the opportunities we had. We had plenty of opportunities, we just kept giving them extra opportunities with a dropped pass or a jump offside or something like that. When you’re playing good football teams, like I said last week, you can’t give good teams extra chances.”

The Berthoud Spartans look to end their three-game skid as they travel to No. 12-ranked Holy Family on Friday, Nov 3.