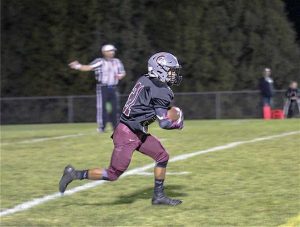 Berthoud Spartans wide receiver Miguel Sarmiento breaks free and runs the ball
to the end zone for a touchdown during the final minutes of the game.
Tiffany Rafferty / The Surveyor

In high school sports, sometimes a team has an advantage over their opponent before they even get off the bus. That was the case for the Berthoud High School (BHS) football team as they hosted No. 6-ranked (3A) Holy Family on Oct. 28 at Max Marr Field.

Holy Family routed Berthoud, 51-6, scoring seven touchdowns and compiling 569 yards of total offense. Late in the game, the Spartans second-string offense moved the ball well and avoided being shutout when freshman quarterback Sam Baird connected with Miguel Sarmiento, who made an excellent adjustment on the ball to reel in a 30-yard touchdown as he fell backwards in the end zone.

The result of the game did not seem to have surprised Berthoud Head Coach Troy Diffendaffer.

“We just can’t match-up with those guys,” he said. “We knew we just didn’t match-up well coming in. We had a couple goals in mind, one of them was to control the line of scrimmage, and I think we did a decent job of that on both sides of the ball. But they’re such big, strong guys.”

While Holy Family did accumulate 219 passing yards and scored twice through the air, the Spartans did make some plays defensively. Sarmiento and sophomore Connor Siruta each intercepted Tiger quarterback Joe Geist, the Berthoud defense swatted down another five passes and just barely missed what would have been a pick-six early in the contest. Yet Berthoud failed to capitalize on each of the two turnovers, going three-and-out after Sarmiento’s pick, and later, after driving 26 yards on five plays, gave the ball back to Holy Family with a turnover on downs.

“They’re taller than any of our DBs, but we came in wanting to make sure our kids were in a spot to have a chance,” Diffendaffer said. “And we did okay, we had a couple picks, made a few plays here and there, but a few times they just went up over the top of us.”

Unlike their occasional successes against the Tigers passing game, Berthoud did not have any answer for Holy Family running back Michael Zeman, who gained an astounding 306 yards on 16 carries and found the end zone three times.

According to Diffendaffer, the problem with the Spartans’ run defense is attributed to the struggles with tackling.

“We work on tackling day-in and day-out. We work on it four times a week, but we’re still giving up too many yards after contact,” the coach said. “We’re just not very strong; we need to get in the weight room a heck of a lot more in the summer time … we’re not blessed with a lot of size, so we need to be stronger; we have to matchup with speed and strength.”

Offensively, Berthoud was able to move the ball at times but would regularly stall out as they approached the red zone. The Spartans had three drives end in Holy Family territory with turnovers on downs and four three-and-outs on the evening. “We completed some passes, we made some plays, but then when we get down to about the 20- or 30-yard-line and we falter, we can’t get anything in,” Diffendaffer said.

Throughout the game, Holy Family was playing seven defensive players in the box with the aim of making Berthoud’s offense one-dimensional. Diffendaffer explained Berthoud’s quarterbacks are taught to pass the ball when a defense stacks players close to the line of scrimmage. The problem for the Spartans was quarterback Brock Voth did not have much time for routes to develop downfield against the Tigers pass rush and ended up having to either scramble to pick up yards or throw short, where the Holy Family defense would swarm to the ball, routinely putting Berthoud in second- and third-and-long situations.

Diffendaffer was pleased with the play of Berthoud’s second unit, who replaced the starters in the fourth quarter.

On the Baird to Sarmiento touchdown late in the game, Diffendaffer said, “Oh that was so great for us. We’ve got two seniors, we’re playing an awful lot of sophomores and juniors, and right, we’re trying to get as many kids quality reps on a Friday night that we can. We’re hoping that they learn from it, they see the speed of the game, they see the size and strength and they buy-in, so next year it’s not the deer-in-the-headlights thing.”

Berthoud (2-7, 1-3 conf.) faces Mead (6-3, 3-1 conf.) in their final game of the season on Nov. 4. The game site has been changed to Mead High School and not the originally scheduled Max Marr Field at Berthoud High school. The Mavericks have ping-ponged in and out of the state top 10 this season and will be looking to secure a spot in the postseason.