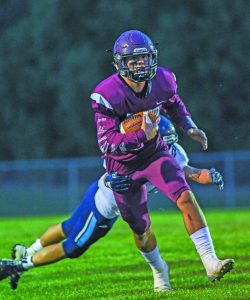 By Lance Elmore, Blink Photography – Berthoud quarterback Jake Lozinski breaks the tackle of a Platte Valley defender in the third quarter of last Friday’s game at BHS. Lozinski led Berthoud with 73 rushing yards, but the Spartans came up short, losing by a 16-0 final score.

There are three phases of the game of football – offense, defense, and special teams – and, when facing stiff competition, a team must play well in all of them to find success.

Unfortunately, for the Berthoud High School (BHS) football team, they were sorely lacking in the offensive phase in last Friday night’s season opener at Max Marr Field at BHS. Facing off with No. 4-ranked Platte Valley, Berthoud was able to muster only 127 yards of total offense and found itself on the wrong end of a 16-0 shutout.

After the game Berthoud Head Coach Troy Diffendaffer chalked up Berthoud’s offensive struggles to the mental side of things, saying, “I think we have to try to find a way to slow the game down for them. Their heads are just spinning with all the stuff and, now that it counts, it gets a little tighter for them … now you’ve got something at stake, you start to tighten up a little bit … you start thinking too much and your body tightens up, and we couldn’t execute very well. We had so many receivers running by guys and we just flat over-threw them. We had 24 (to) 38 points that we just left out there.”

Berthoud lists only 27 players on their varsity roster, which forces many of the players to play in two or even all three phases of game, something Diffendaffer admits is a challenge, especially from a conditioning standpoint. “These games are won in the offseason … we’ve got to get these guys ready to go in two-way shape,” Diffendaffer said. “Last year we could go one-on-ones and get good work, and now you go one on scout team, we can’t give ourselves the same look.”

Defensively, Berthoud was more than up to the task. The Spartans kept Platte Valley off the board until the 7:07 mark in the third quarter when Bronco placekicker Alberto Perez made good on a 28-yard field goal. Berthoud proved unable to respond, going three-and-out on the next possession and by then fatigue begun to set in. The Broncos took over on their own 38 and assembled an eight-play, 62-yard drive capped off by a two-yard run from tailback Ernesto Rios that put Platte Valley ahead 10-0 with 3:01 left in the third quarter.

As senior linebacker and team captain, Anthony Trojahn, explained, “With everything, once you get tried you get a little lazy and when you have to keep going it’s a lot easier to get lazier and think ‘well, I’ll get it next play,’ and we’ve just got to tune up and get after it every single play … that little bit will change a lot for us.”

In an attempt to create a spark on offense, Berthoud replaced starting quarterback Jake Lozinski with Brennan Garvin, but the change failed to bear fruit as the Spartans turned the ball over on back-to-back possessions. Diffendaffer explained the quarterback change had nothing to do with Lozinski’s performance, but rather the team just wanted to mix things up.

“J.T. did everything we asked him to do … we just wanted to take a little pressure off J.T. and see if that would help spark him to get outside and make a play,” Diffendaffer said. While Berthoud struggled to build and maintain momentum in the passing game, Lozinski was effective running the ball and finished the night pacing the Spartans with 73 rushing yards on 11 carries.

Berthoud will try to right the ship on Friday night when they welcome Elizabeth to Max Marr Field for a non-league tilt. Kickoff is set for 7 p.m.