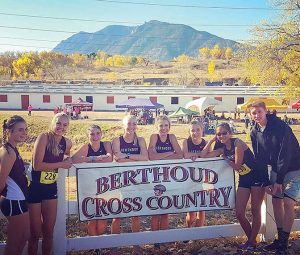 While this year looked to be a rebuilding year at the beginning of the season, last week the Berthoud High School girls cross country team managed to pull off an upset at the 3A Region 4, qualifying for the state meet.

None of the returning girls had broken 23 minutes for the 5K distance, which is considered a marginal time for a varsity runner. Only once during the season had the girls team beaten more than 30 percent of the teams in their races, including a last-place finish at the John Martin Invite.

Regardless of the projections, the girls set their goal to qualify for the state meet, and each girl knew she would have to work extremely hard to make it happen.

The girls focused at practice every day. They took care of the little things like eating well, getting enough sleep, stretching, keeping up with grades, and reducing stress, to ensure they were healthy and avoided injuries. The girls also trusted and relied on one another. They were willing to push harder in practices and races than they thought they could because they knew their teammate was trying their best too. They did it for one another.

All five scorers ran under 23 minutes, with three of them breaking the 22-minute mark. It all paid off when the girls placed third in the regional meet and earned the trip to state, only the fourth girls team in school history to qualify to state.

With a week to change the focus from just making the state meet to achieving something at the state meet, the girls team prepared for the hilly course and the opportunity to run against the best girls in the state. The preparation went well, the girls were ready, and when the gun sounded Berthoud’s girls ran the best they could last Saturday. Maycee White, BHS’ top runner all year, finished in 87th place; Alex Schultz in 98th place and Liz Bosnich in 135th place. Schultz and Bosnich each improved her time on this same course from the beginning of the season by over a minute and a half.

Alyssa Radloff was 121st. Kathryn Mathiesen focused on keeping her form and ran a minute faster than she had on the course in August, for 141st place. Julianne Evans Dennison improved by over three minutes from August to finish in 148th place. Cailey Archer was 155th place.

The girls team finished 19th, not the results the girls were hoping for, but each girl left the course talking about how motivated she is to train hard in the off-season and to return to state next year and make a statement. Berthoud does not graduate a single girl this year.

On the boy’s side:

Josh Doyle was the only boy to qualify to state. The senior had a strong season, finishing his last three meets in seventh place at Andy Myers, Tri-Valley Conference and 3A Region 4 meets.

By the time Doyle raced Saturday, the temperature on the course had risen to close to 80 degrees. While Doyle prepared to start in the boys 3A race, the girls 4A race was finishing in the stadium. The top-two girls in that race had collapsed to the ground in the final 50 meters. They both were able to get up and finish, but not without stumbling in the final steps again. It was evident the heat had become a factor.

Coach Jennings quickly recommended to Doyle to abandon the race plan and start out conservatively. However, the pack went out fast and Doyle found himself going through the first mile faster than he had hoped. He lost a few places throughout the course but ran as hard as he could. Doyle had nothing left when he crossed the finish line in 54th place, the best placing of a Spartan at the state meet in the past 10 years.