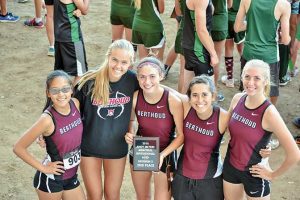 The cross country course at Island Grove Regional Park in Greeley was promoted as being a fast course, and the Berthoud Spartans took advantage of it.

Maycee White went out hard and established herself in eighth place by the first half-mile. Ryleigh Carr of Highland High School chased White throughout the entire course but was never able to catch White, who remained in eighth place with at time of 21 minutes, 28 seconds.

Junior homecoming princess Liz Bosnich had a very slow start, being in 40th place after the first quarter-mile. Bosnich, who normally runs with Alex Schultz, had to work her way up throughout the race to catch Schultz. The two finished two seconds between one another, with Schultz 23:04 and Bosnich 23:06 in 17th and 18th places. Kathryn Mathiesen ran a personal-best time of 23:24 to finish in 25th place. Cailey Archer was the final scoring member of the girls’ team, sealing a second-place team finish. The sophomore ran 24:38 for 42nd place. Conifer won the girls 2A/3A title with 64 points, Berthoud had 119 and Woodland Park was third with 134 points.

Senior Josh Doyle continued his streak of bringing home individual awards with his seventh-place finish in the boys’ varsity race. Doyle finished in 17:45, becoming the 21st-fastest Spartan since 1978.

“It was a fast course, and I knew I was running a good pace,” stated Noah Burtis after clocking 18:09 to finish in 13th place. To put the time in perspective, Doyle’s best time last year was 18:05. Burtis, a junior, has a good shot to follow in Doyle’s footsteps (pun intended).

Sophomore Siler Stein placed 29th, breaking the 19-minute barrier for the first time, finishing in 18:57. Ty Williams ran 19:41 for 44th place. Kevin Sethre was four places back in 48th place, running 19:55. Two sophomores, Samuel Hatton and Rowan Carr, got the call to run in the varsity race this week. Hatton took advantage of “running with the big dogs” and dropped his best time by another 22 seconds to finish in 20:08 for 55th place. Carr was 66th in 20:37.

Kade Leonard, who has been injured, ran his first race of the season. The sophomore placed seventh in the JV race with a time of 18:47. Gabe Ramirez ran 18:58 for 16th place. Eric Rennaker, who was the Spartan mascot at the homecoming game on Friday night, continued that fighting spirit throughout his race, finishing in 23rd place with a time of 19:16.

“Lela and Gabriella had the best finishes of the day”, stated Carter vonSeggern (72nd in boys JV, 20:37). He was referring to Lela Urbain and Gabriella Rennaker, who passed a total of six girls in the final sprint to the finish in the girls JV race. Urbain placed 85th in 29:25 and Rennaker was 89th in 29:41. Both girls are returning from injuries. Kimberly Blough improved over a minute from last week for 62nd in 27:30.

The freshmen and sophomores will compete at the Northwest Open Space in Northglenn on Oct. 4. The full team will race at the Tri-Valley Conference meet on Oct. 11.