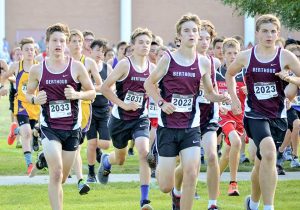 R to L: Carter von Seggern, Bryce Mitts, Rowan Carr, Will Payne, and Samuel Hatton each ran personal best times at the John Martin Invitational in Ft. Collins last Friday. Carr (20:33), Hatton (20:34) and Mitts (20:36) finished within three seconds of one another in the boys open division of the 5K race.
Courtesy of Karen von Seggern

Berthoud’s Josh Doyle was told to get out fast at the John Martin Cross Country Invitational on Friday. Berthoud had been assigned to box No. 1, which meant the entire field would be crowding in onto the runners as they headed to a narrow gate about 200 meters from the starting line. The strategy was a new one for the senior as he usually prefers a more moderate pace at the start of a race. But the new strategy paid off, as the senior set another personal best time of 17 minutes, 53 seconds and an 11th-place finish. He also discovered he can start faster and still maintain a good rhythm throughout the race.

Noah Burtis, running in the second spot for Berthoud High School, continued to improve. The junior has taken almost a minute off his fastest time from last year. He ran 18:43 for 25th place on Friday.

Freshman Carlos Gutierrez followed 10 seconds later in 26th place. Eric Rennaker is one athlete who always gives the spectators a show at the finish line, with his kick. The senior closed the gap on Siler Stein, racing down the final stretch to set a personal-best time. Both boys were clocked at 19:58, but Stein was credited with holding off Rennaker for 44th place; Rennaker was 45th.

In the girls varsity race, Maycee White felt the consequences of not getting out quickly, as she had to use her elbows to keep her position through the narrow gate. White recovered some of the places she lost and led the Berthoud team with a 25th-place finish with a time of 22:09.

Alyssa Radloff followed White closely throughout the race and finished in 32nd with a time of 22:30 to post the best race she has run in the past year.

Cailey Archer placed in 43rd with a time of 23:32. All three of these returners have improved their best times from last year by over a minute, showing their hard work is paying off.

Newcomers Liz Bosnich, Alex Schultz and Julianne Evans Dennison had a chance to see a new level of varsity competition in Ft. Collins. Bosnich started near the back of the pack and moved up throughout the final mile to place 40th in 23:08. Schultz was picked off in the final sprint by Archer but finished with the same time of 23:32 for 44th place. Evans Dennison posted a time three minutes faster than her first time of the season with 25:34 for 50th place.

Both varsity teams finished in the back of the team standings, but there were so many runners who have improved their times that the meet was labeled a success. All totaled, 21 athletes set new personal records for the 5K cross country distance. The next meet for the Spartans is Friday at Lake Loveland beginning with the varsity girls at 4 p.m. followed by the varsity boys at 4:30. The open races follow the varsity races. This year features a new course and pizza for the winning teams.