Senior Elijah Grewal was Berthoud’s sole qualifier to the Colorado cross country state meet held in Colorado Springs this past weekend. Grewal may have been the only Spartan on the course, but his teammates were behind him supporting him all the way. 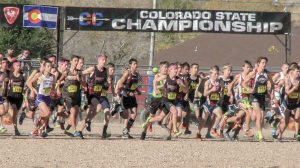 Throughout the week, teammates came out to meet and train with Grewal to give him encouragement as he prepared for the big show. Several teammates also made the four-hour round trip to Colorado Springs to cheer on Grewal on Saturday. Running at the state meet is a very different experience for someone who is usually near the front of the race, as Grewal had won two meets and placed in the top six three other times this season. He rarely has much of a crowd to run with. However, almost everyone at the state meet is used to being in front of their local meets. Instead of being with a small group of front runners, there is a steady stream of guys running very fast.

Grewal drew one of the furthest boxes to the right–box 25–for the start. This meant he would have to have an extremely fast start to get ahead of the crowd who would make a right turn about 150 meters into the race. Grewal had to weigh the blistering pace he would have to start in order to not get pushed back around the turn with the mental strength it would take to push himself to pass people the entire race to make up for the lost positions. Grewal chose to follow his usual game plan of picking off runners throughout the race rather than risking going out too fast.

After the first 400 meters, Grewal was in about 150th place. At the three-quarter-mile mark, he had moved up about 40 places. The race was fast, with the first runners coming through the mile under five minutes. Then the race took a turn away from the estimated 1,500 – 3,000 people cheering on their favorite athletes to the hilliest part of the course. This back section was much quieter, much tougher, and a place where many athletes backed off of the pace to prepare for the final mile. Grewal, however did not back off, but rather used this part of the course to pass those who had either gone out too fast or who were not mentally tough enough for this section. By the time he returned to the crowd-lined last mile, Grewal had moved up into 67th place.

There were so many spectators along the course that at times Grewal had to shift his form not to run into those standing on the side of the trail. With 400 meters until the finish line, Grewal splashed through a water crossing and up the final hill, past horse stables, and into the stadium at the Norris-Penrose Equestrian Center. Grewal unleashed a final kick that would have made it difficult for the horses to beat. Grewal passed eight competitors in the final 100 meters to finish in 59th place. The best finish for a Berthoud runner since Derek Gwin’s 54th place in 2008 and Tom Duffin’s 15th place in 2001.

While Grewal has not made up his mind on post-season races, several other Berthoud High cross country runners will race at the Junior Olympics Colorado qualifier on Nov. 7. The top 30 individuals will advance to the regional meet in Albuquerque on Nov. 21. The Junior Olympics is open to competitors age 7 and older. See the USATF Colorado website for more information.