By Dan Karpiel
and John Gardner
The Surveyor 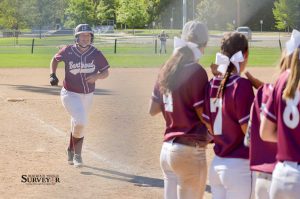 Berthoud first baseman Madison Herbert smiles as she approaches home plate after hitting a solo
home run in the fifth inning of the consolation game against Sterling on Sat. Sept., 12, as her teammates lineup to congratulate her. The Spartans finished the tournament in third place, defeating Sterling 7-2.
John Gardner / The Surveyor

Their annual namesake tournament – the Spartan Invitational – could not have come at the better time for the Berthoud High softball team. On Thursday, Sept. 10, the Lady Spartans lost in ugly fashion to Tri-Valley Conference (TVC) rival Windsor 7-0. The following day, the Spartan Invitational began, giving Berthoud a chance to right their ship and get back to winning ways.

Playing their first game of the Spartan Invitational less than 24 hours after the loss to Windsor, Berthoud Head Coach Buddy Kouns opted to make some changes to his lineup. Kouns moved Larissa Royer, who normally bats leadoff, into the two-hole and moved sophomore Delaney Fouts up to the top spot from her usual place in the bottom-third of the order. Kouns also moved Taylor Armitage from the third to sixth in the order made use of a pair of freshman, Jorissen and Addi Spears, the latter getting her first action at the varsity level in the tournament.

The changes paid dividends for Berthoud as the Lady Spartans won three of four contests, besting 5A Prairie View 10-3 and 3A Lamar 12-2 on Friday, Sept. 11. The following day, Berthoud fell 3-1 to perennial power Strasburg but bested Sterling 7-2 in their final game of the weekend.

“We wanted to shake it up because we haven’t really played three games well in a row,” Kouns explained following the win over Lamar. “Initially we top-loaded our lineup and I felt like through three games now we didn’t feed off of each other … and I thought instead of top-loading it I wanted to balance it.”

Berthoud broke out of their funk in a big way in their opening game against Prairie View. In the second inning, back-to-back doubles off the bats of Jorissen and Armitage were followed up a Spears walk. Armitage scored when Sydney Kouns and Fouts each reached on fielder’s choices. Royer cleared the base pads with a single to put Berthoud up 4-0 in the bottom of the fourth.

The Lady Spartans continued on their torrid offensive pace in the next inning, hanging another four runs on the board as Fouts, Jorissen, Armitage, Kouns and Hannah Langer all tallied hits. When all was said and done, Armitage finished the game with three hits, including two doubles, and three runs scored. Armitage was equally-effective from inside the circle, allowing just two earned runs and striking out seven in five innings of work. Royer pitched a perfect sixth inning to clinch the win for Berthoud.

In their second game of the opening day of the Spartan Invitational, Berthoud jumped out to a big lead right off the bat. Royer reached on a fielder’s choice, Madi Herbert and Lindsay Erickson both got aboard by working walks. A double by Armitage and a triple by Spears, who showcased some serious speed rounding the bases, later and the Berthoud held a 5-0 lead before Lamar had a chance to bat. Berthoud did not take their foot off the accelerator, adding another three runs in the second and four in the fourth to get the five-inning, mercy-rule win.

Royer turned in a solid effort from inside the circle, allowing just four hits and one earned run in four innings of work. In another lineup change, Kouns gave the gear to Erickson, giving a Langer a rest from her usual job as catcher. Royer and Erickson demonstrated great rapport, thanks to their work as a battery in club softball, with Erickson calling a game that fit Royer’s pitching approach to the letter.

“I’m really familiar with her pitches and I know what she likes to throw and what she’s comfortable with,” Erickson said. “We definitely had a lot more confidence today, we came out hard and ready to play, it felt really good, I felt like the team really came together.”

The Berthoud Spartans finished their namesake tournament, the Spartan Classic, held at Barnes Softball Complex in Loveland, Sept. 11-12, with a 3-1 record and finished in third place. While the team didn’t walk away as champions as they did last year, they improved, according to Berthoud softball head coach, Buddy Kouns.

“This weekend, I think we grew,” Kouns said. “I hope we just keep growing.”

Berthoud’s (6-4) final game against 3A Sterling (7-2) may have been the final game of the tournament, ending with a 7-2 victory for Berthoud, but it was Saturday morning’s contest against 3A Strasburg (10-0) that was the highlight of the tournament. Strasburg narrowly beat Berthoud 3-1, but not because they outplayed the Spartans. It was two costly errors that allowed two Strasburg runs in the third inning that ultimately gave the Indians the win.

“The championship game was played earlier in the day,” Kouns said. “That’s what decided the tournament.”

Berthoud played well against the top-ranked 3A opponent, Strasburg, and senior Taylor Armitage had an outstanding game from inside the circle. Pitching six innings, she gave up five hits, three runs but only one earned, and struck out 11.

“Taylor pitched a brilliant game,” Kouns said. “You give up one earned run, you should win that game.”

After the loss, Kouns said he and the team talked about having a good rebound game; that they did.

“It was a tough loss, but it wasn’t a bad loss,” Kouns said of the Strasburg game. Then they turned their focus to Sterling.

Berthoud struck early in the consolation game against Sterling when senior Larissa Royer scored off an Armitage double in the first inning. Armitage later scored off a Madison Herbert single to put the Spartans up 2-1.

Sterling tied things up in the second and held Berthoud scoreless. Things got interesting in the third inning when a run scored by Armitage was nullified after the home plate umpire reversed the second base umpire’s incidental contact call on Armitage to an obstruction call. Armitage and Sterling’s shortstop collided as the ball crossed the baseline and was initially called incidental contact.

“Obstruction is one thing; incidental contact is another,” Kouns said. “It happened right in the base line and Taylor didn’t run through her, she pulled up and the shortstop ran into her.”

The game remained 2-2 going into the fourth inning, but that’s when the Berthoud bats got hot. Berthoud scored two runs, including one by Hannah Langer who hit a double, stole third base, then scored on a single off the bat of Delaney Fouts.

Going into the fifth, Berthoud was up 4-2 and held Sterling scoreless in the fifth. Then Spartan’s first baseman, senior Madison Herbert, walked up to the plate and hit a single-shot homerun to extend Berthoud’s lead 5-2. As soon as she heard the bat strike the ball, she knew it was gone.

“I’ve been struggling the entire tournament,” Herbert said. “Finally, I changed my method to see what would happen. I stepped into it and it just felt effortless; how it’s supposed to feel, and it felt great.”

Two batters later, senior Sydney Kouns hit a double into center field, knocking in two more runs to give the Spartans a 7-2 lead and the win as time expired. Sydney, too, said it felt great to finally get out of a hitting slump.

“Everyone has a roll and at that moment there were runners who needed to score,” Sydney said. “And we just needed to keep hitting.”

Despite the Strasburg loss, Herbert said it was a solid performance from her team.

“It feels pretty good,” Herbert said, “because we always do well at our Spartan Classic, and it feels good to win against a great team and finally see us hitting more as a team.”

Berthoud entered the game with Windsor on Sept. 10 as the seventh-ranked team in class 4A but they played like anything but. The Lady Spartans did very few things well in the 7-0 loss at Bein Field, tallying only two base hits – a single from Hannah Langer in the second inning and another single off the bat of Sarah Jorissen in the bottom of the sixth. Berthoud also committed a pair of fielding errors, surrendered 10 hits, allowed 18 total baserunners and six stolen bases. Pitcher Breanna Hamilton, a southpaw, threw the complete game shutout for Windsor, fanning six Lady Spartans without allowing a single walk.

The Lady Spartans kept their momentum going on Sept. 15, besting Holy Family by a 10-6 final down in Broomfield. Armitage appears to be back at her All-Conference form; the senior threw five innings of one-run ball and turned in a 2-for-4 effort from the plate, including a double, a triple and two RBI. In the last five games, Armitage has raised her batting average from .210 to .353 while driving in seven runs and accumulating 11 total bases. Sydney Kouns also had two hits and two RBI and Langer, in addition to having two RBI of her own, had an astounding five stolen bases.