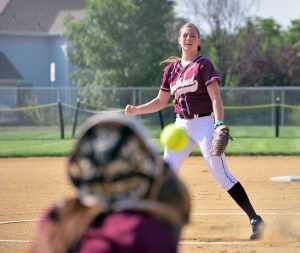 Of all the possible ways the Berthoud High School softball team envisioned the 2015 season beginning, getting shut out – not to mention no-hit – at home, by a conference rival, was most assuredly not it.

Hosting Tri-Valley Conference (TVC) rival Erie at Bein Field in Berthoud on Aug. 25 for their home- and season-opener, the Lady Spartans found themselves on the wrong end of a 6-0 shutout. To add insult to injury, Berthoud was unable to notch even a single hit against the Lady Tiger’s superstar pitcher Rio Sanchez.

The junior from Erie threw a complete game no-hitter, fanning eight Lady Spartans and allowing just two base-runners – Hannah Langer reached via a walk in the bottom of the seventh and Lindsay Erickson got aboard courtesy of a fielding error by Erie third baseman Elise Capra in the second – and gave her team all the runs they would need with a lead-off homerun in the top of the first inning.

Usually indomitable Berthoud pitcher Taylor Armitage surrendered six runs on 10 hits and appeared to be over-pitching at times early in the game. The senior recorded the seven of the first nine outs via strikeout but also allowed five runs to cross the plate; the Lady Tigers were either getting fanned or making solid contact, there seemed to be little middle-ground. Armitage eventually settled in, allowing only one run on three hits and a walk over her final four innings from inside the circle.

“Taylor actually pitched a decent game, the ball that Rio hit to lead the game off was a two-strike pitch and she took it off the ground; it was a good quality pitch, and when that happens you tip your cap to the hitter,” Kouns said.

As is usually the case, the six Erie runs cannot be solely attributed to Armitage as the Berthoud defense allowed Erie to swipe four bases, and three of the Lady Tiger base-stealers came around to score, as did another who advanced on a fielding error.

“That’s disappointing to me because we’re not closing innings out, we will work on that,” said Kouns.

Yet, despite the disappointing loss, Berthoud is well aware that they have 18 games remaining and on Tuesday faced one of the best teams they will play all season.

“We knew coming in this was going to be a tough game,” Kouns said. “We’re not going to let one game determine our fate, it’s just one game.”

Berthoud will travel to Loveland for a non-conference matchup with Thompson Valley on Aug. 28 before returning home for a pair of back-to-back TVC games with Mead and Roosevelt.