There were certain to be bumps along the road.

The Berthoud High School softball team, one which has only a few players who entered the season with meaningful varsity experience, was going to suffer some setbacks this season, especially early on. After winning their first two games of the season, on Tuesday afternoon at Bein Field, Berthoud was defeated by a 10-3 final score by longtime rival Roosevelt. 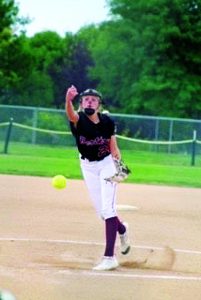 “What we did tonight is we showed our inexperience, and not just our youth, because it’s not just our freshman who struggled a little bit, it was our kids who haven’t been on this field much,” said Head Coach Buddy Kouns after the game. While admitting that games like Tuesday’s were expected considering the squad’s collective inexperience, Kouns was confident it will be used as learning experience saying, “You go forward and learn from it, and we make some adjustments, or we continue to struggle. I’m confident we have the make-up with these girls that we’re going to make some adjustments and we’re going to learn.”

Roosevelt got off to a strong start by capitalizing off some Berthoud miscues – two passed balls and fielding error were sandwiched a pair of doubles – to give the Lady ‘Riders an early 3-0 lead. Kouns said he believed his team entered the game not as mentally sharp as they could have been saying, “They jumped on us early … we spotted a team three runs that we can’t spot three runs to early because we weren’t mentally ready to play.”

Berthoud pitcher Cemryn Pickett, making her third start of the year, induced three ground balls to get out of the first inning after allowing three runs. Coming to the plate for the first time, the Lady Spartans answered back. Singles from Gracie Flores, Ellie Yuska and Pickett pushed two runs across the plate as Berthoud got right back in the game.

Roosevelt added two more in the second inning but, once again, Berthoud answered back. Maggie Langer reached on a walk, stole second base, advanced to third on a passed ball and game home on a Flores single. Unfortunately for Berthoud, Langer would be the last Lady Spartan to cross home plate in the contest.

Roosevelt pitcher Malaya Coleman settled in after the second inning and allowed only four players to reach base in the final five innings of the game. “Malaya Coleman is a quality pitcher, she’s not going to overpower anyone, but she has an above-average high school fastball and she hits her spots, she’s good at identifying a hitter’s weakness and going after it and we didn’t make an adjustment all game long,” Kouns said.

Roosevelt scored three more runs in the fifth inning and added two more in the sixth, with Berthoud unable to answer back. The Lady Spartans did have some opportunities but failed to capitalize. Junior Carly Fischer returned to the lineup and singled in each of her last two at-bats but was stranded on base both times.

Flores also reached base in all four of her at-bats and advanced to second on a perfectly executed sacrifice bunt from Sierra Pirkey to create a two-on, one-out situation with Fischer at third. But Coleman was up to task, inducing a pop-up and striking out Yuska to get out of the frame with no damage. Coleman went on to fan four Berthoud batters in the final two innings to earn her third win of the young season.

Berthoud (2-1) will play their first game away from home this Thursday when they travel up to Loveland to take on Mountain View (3-1).