Lady Spartans back to winning ways

It was only a matter of time.

It didn’t take long for the Berthoud High School softball team to break out of its (very) early-season funk and play like the team they knew they would be.

Getting shut-out and no-hit at their home diamond to a conference rival Erie in the season opener now feels like a distant memory – even though it took place just over a week ago – after the Lady Spartans won back-to-back games in impressive fashion.

Berthoud overcame a 4-0 deficit to beat Thompson Valley by an 11-6 final on Aug. 29 and then shut out Tri-Valley Conference (TVC) foe Mead 6-0 on Sept. 1 at Bein Field at BHS. 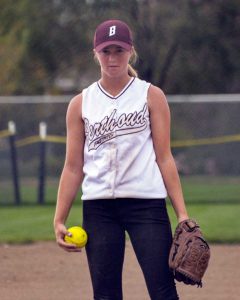 Berthoud 11, Thompson Valley 6
What began ugly ended much prettier on Aug. 29, at the Centennial ballfields in Loveland.

Three hits, including a double off the bat of Thompson Valley leadoff batter Hannah Sullivan, and a walk sandwiched a sequence that saw Berthoud commit two fielding errors on a single play, allowing four Lady Eagles to cross the plate in the third inning.

Then, the tide began to turn in the Lady Spartans’ favor, and it was the bottom of the Berthoud order that shined.

Six-hole hitter Hannah Langer started things off by legging-out a triple with in the top of the fourth. The Lady Spartans’ catcher scored quickly when Tristan Pope reached on an error by Thompson Valley shortstop Taylor Tremelling. Pope stole second base and scored on a single off the bat of Delaney Fouts. Fouts herself subsequently stole second and scored when Sydney Kouns slapped a double into the opposite field.

Berthoud pitcher Larissa Royer then blasted a homerun over the left-center fence to put the Lady Spartans ahead 5-4. Royer hit another round-tripper in the seventh inning, again driving in Kouns.

“The first two at bats I was having problems getting used to the slow pitching,” said Royer after the game. “But after the timing got down [Thompson Valley pitcher Kailyn McVay] just kind of just threw meatballs.”

Berthoud head coach Buddy Kouns said that the small-ball approach he employed in the fourth inning worked as he had envisioned.

“Oh absolutely, that’s what we decided; we got together between innings when we were down 4-0 and we said ‘look, we’re coming into the bottom of the order, let’s put the ball on the ground, lets run ‘em out and let’s let the top drive them in and that’s what we did,” Kouns said.

Lindsay Erickson hit a solo homer that nearly reached First Street in the fifth to extend Berthoud’s lead to 6-4. In the sixth frame, Madi Herbert hit a bases-clearing double that drove in Royer and freshman second baseman Sarah Jorissen, who scored the first run of her high school softball career.

In addition to her 3-for-5, two-homeruns and four RBI night from the plate, Royer struck out 13 Lady Eagles while walking only two; the hit-error-walk-hit sequence in the third was her only real blemish on the night from inside the circle.

“You can’t let one error even take a couple minutes because even a couple minutes is too long with how fast softball moves,” Royer said following the game. “Instead of frustration it kind of turned more into determination to get more next time and do better.”

Berthoud 6, Mead 0
Berthoud’s All-Conference pitcher and heart-of-the-order hitter Taylor Armitage broke out in a big way on Sept. 1 against visiting Mead at Bein Field. The senior threw a complete game shutout, striking out 11 Lady Mavericks and allowing just a pair of hits and zero walks on the way to notching her first win of the 2015 season. Armitage also went an impressive 2-of-4 from the plate, with a double and two RBIs.

The Lady Spartans scored five of their six runs in the third inning and cruised to the 6-0 victory. It is their first TVC win of the year. Langer (1-for-3, two RBIs), Erickson (2-for-3, one RBI) and Pope (1-for-2, one RBI) also drove in runs for Berthoud.

“This is a lineup to tangle with when we’re firing on all cylinders,” Kouns said.