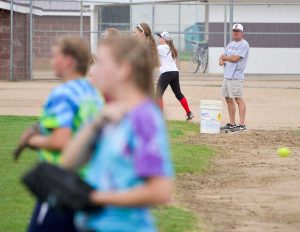 First year softball head coach Buddy Kouns watches as more than 30 girls practice at Bein Field at Berthoud High School on Aug. 18. Kouns may be new to the top spot in Spartans softball but he’s been, and remains, Berthoud’s baseball coach. Kouns said that this year there is a lot of interest for the team and the amount of girls who’ve come out for a spot on the team is higher than it’s been in years.
John Gardner / The Surveyor

It is rare to find a program, especially one that has been as successful for as long and as consistently as the Berthoud High School softball team, make their third coaching change in as many years.

Yet, that is precisely where the Lady Spartans find themselves.

For the 2015 season it will be Buddy Kouns calling the shots from the Berthoud dugout. Kouns, who is also the BHS baseball coach, takes over for Ashtin Williamson, who departed after a single season in command. In 2014 Williamson replaced Teresa Alba, who ran the softball show in 2012 and 2013 after spending several years as an assistant to long-tenured Head Coach Dick Klocek, who had spent over a decade building the softball program into a perennial state contender.

Kouns is not a neophyte to either the game or the Berthoud community, as he has spent a sizable portion of his adult life intimately involved in Berthoud sports as a coach, a father, an uncle and a mentor. When the opportunity presented itself to coach the Lady Spartans, Kouns jumped at the chance.

Yet it was not just Kouns’ familiarity with several of the team’s key players – his niece, Sydney, now a senior, was the Lady Spartans’ starting shortstop and a top-of-the-order batter in 2014 – that prompted him to seek and ultimately accept the position, but rather his belief that he can affect the change needed to get Berthoud back into title contention.

“Berthoud softball is historically a powerhouse at the 4A level,” Kouns said. “Last year I watched them, and the year before I watched them and I thought, ‘if they did some of the little things better they’ll take another step.’”

After finishing as state runner-up in both 2010 and 2011, Berthoud lost in the state semi-finals in 2012 and 2013 and then last season missed the state tournament all together.

It is a downward trend for an elite program that Kouns hopes to reverse. He and his staff are preaching the mantra: “New faces, new ideas, same domination.” 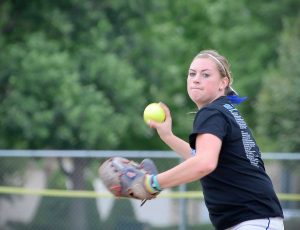 Berthoud’s Taylor Armitage throws to first base during a practice on Aug. 18. Armitage returns for her senior year, playing for her third head coach in as many years. Armitage’s experience and leadership on the field will be a benefit to the team this year.
John Gardner / The Surveyor

Players seem to be taking the change in stride. Senior pitcher and infielder Taylor Armitage said the team is adapting well to another coaching change.

“It’s been a bit of adjustment for a lot of us girls who’ve been in this program for a while, actually, but we know Buddy and we know how he coaches so we know what to expect,” Armitage said. “I definitely think that him coming in and knowing most of these girls already, it’s going to make a bigger impact than expected.”

Asked if the fundamentals-centric approach he uses in baseball will be altered with the softball team, Kouns was unequivocal, saying, “No, there is no change to my approach. We still are building fundamentally from the ground up. What I want these girls to learn from us this year is there are always fundamental repetitions that we should be doing on a daily basis that I believe should take them to another level.”

Kouns will not be working with a bare cupboard, either. The Lady Spartans lost just one senior, albeit a key one is in All-State centerfielder and cleanup hitter Jessi Boruff, but return both starting pitchers in Armitage and Larissa Royer as well as catcher Hannah Langer, infielders Lindsay Erickson, Madi Herbert, Delaney Fouts, Sotera Dageenakis and the aforementioned Sydney Kouns. Armitage, Herbert, Langer and Royer each received All-Conference honors, in either the first-team or honorable-mention categories, in 2014.

“We are lucky enough to have two number-one (pitchers) here,” Kouns said referring Armitage and Royer. “Honestly, I believe they are two of the elite arms at the 4A level and we’ve got them. Pitching in this game is so key.”

Royer, who was 8-2 with a 2.47 ERA threw three shut-outs and a no-hitter in 2014, said her repertoire now features seven different pitches, an upgrade over last year’s five. The senior remarked that she does not harbor feelings of melancholy and instead will use the fact that it is her final season of high school softball as a motivator.

“I feel like it initiates a lot more drive and a lot more want because it’s our last year … I just need to focus on doing what I do.”

Armitage (6-6, 3.11 ERA, 87 Ks) echoed those sentiments but admitted there are definitely a lot of emotions going into this senior season. Armitage may be even better from inside the batter’s box than she is from the circle. Hitting primarily from the critical three-hole spot in the order, Armitage led the Lady Spartans in both batting average (.538) and extra-base hits (20) and was second on the team to the now-graduated Boruff in on-base percentage (.570), slugging (.937), RBI (31) and homeruns (five) last season.

The incoming senior said she spent the offseason working primarily on pitching.

“That is something you want to keep up on,” Armitage said. “You have your spins, you have your speeds, your stride; you have a lot of factors going into that.”

Kouns acknowledges the talent of his pitchers, and of much of his lineup, will get Berthoud a long way but returns to stress the fundamentals, believing that is what will ultimately put the Lady Spartans over the top in the incredibly tough Tri-Valley Conference.