Spartans off to a feisty start

Even though they are just one week into the 2016 season, the early returns on the Berthoud High School (BHS) softball team have been largely positive.

There is a lot of softball left to be played, an 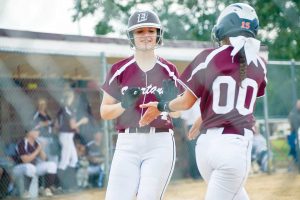 Berthoud’s Morgan Schachterle (24) is congratulated by teammate Sotera Dageenakis as she crosses home plate during
the home opener against Roosevelt on Aug. 25. The Spartans won the game 12-2.
John Gardner / The Surveyor

d the competition will without a doubt get tougher. But four games in, the Lady Spartans find themselves sitting pretty with a 3-1 record that includes a perfect mark in their three Tri-Valley Conference (TVC) games. Berthoud dispatched TVC foes Roosevelt and Skyline, but sandwiched between the wins was a loss to Thompson Valley.

The Lady Spartans put the proverbial smack-down on TVC rival Roosevelt in Berthoud’s home-opener on Aug. 25. After allowing the Lady ‘Riders to take an early 2-0 lead in the top of the second, Berthoud clamped down and did not allow another run to cross home plate. The Lady Spartans then started raking from the plate, scoring four runs in the third inning, three in the fourth, and five in the fifth to get the mercy-rule shortened 12-2 win in five innings.

“At the first game it was a lot of pressure, honestly,” Jorissen said. “But I just realized I’ve got to just pitch and do my thing … my team has really been helping me out.”

In an early-season, non-conference bout that pitted a pair of top-10 ranked teams, the young Berthoud squad learned that a few small mistakes can make a big difference. A couple of BHS fielding errors, some timely hitting by Thompson Valley, and a base-running snafu made the difference in closely-contested, hard-fought game that ended in Thompson Valley’s favor, 4-2, on Aug. 26 at Bein Field in Berthoud.

“That’s what I was just telling the girls, they made us pay for our mistakes tonight,” Berthoud head coach, Buddy Kouns, said after the game.

Two errors by the Berthoud infield in the second inning and three straight hits from Thompson Valley in the fourth put the visitors ahead, 3-0. Yet, as they had done the day prior, Berthoud appeared poised to battle back from the early deficit. Sophomore right fielder Addie Spears singled and stole second before Pope was struck by a Kailyn McVay pitch. But Berthoud’s two-on, two-out fifth-inning threat ended with a routine ground-ball out.

In the next frame, Jorissen reached on an error and pinch-runner Kalissa Thoren advanced to third on a Balliet single. Thoren scored when Sedona Cook reached on another error and Balliet came home on a hard hit ball by Langer to cut Thompson Valley’s lead to 3-2.

With one out, and Cook representing the tying run at second base, a pop fly off the bat of Sotera Dageenakis was snared in foul territory by third-baseman Hannah Sullivan. But Cook had already taken off from second base and, after catching the pop fly, Sullivan quickly pivoted and threw to behind Cook to second base for the third out, ending the inning and preserving Thompson Valley’s one-run lead after six innings.

“She knew when she rounded third base ‘what have I done’ … and no one feels as bad as she does,” Kouns said of Cook. “All in all, if we find a few holes early, it’s a different game.”

Jorissen and Langer each tallied three hits on the afternoon, with Jorissen driving in three runs and Langer stealing two bases, as the Lady Spartans won their second TVC road game of the season by a 9-4 final over Skyline on Aug. 30.

Berthoud pitcher Lexi Nygard, in her first start of the year, allowed Skyline to scatter five hits but surrendered only two runs and struck out a pair in three innings of work from inside the circle before being relieved by Jorissen for the final four innings. The sophomore allowed just a single hit and one earned run while striking out five Lady Falcons batters.