Hot start cools off as Spartans fall to Falcons 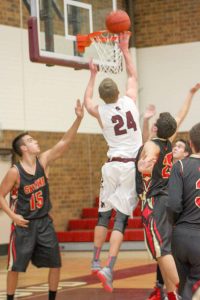 Berthoud’s Cody Braesch goes up for a shot against Skyline on Jan. 9.
Angie Purdy / The Surveyor

Getting off to a hot start is usually a good thing in sports. But a hot start will only take a team so far. They have to be able to finish the game equally strong.

That lesson was displayed last Friday night at the Berthoud High School gym as the Spartans boys basketball team, despite being buoyed by a 13-3 first period lead, ultimately succumbed to some shooting struggles and ill-timed turnovers to fall to the visiting Skyline Falcons 47-40.

Junior shooting guard Patrick Barron scored seven as Berthoud assembled an 8-0 scoring run in the final 3:55 of the opening period, taking advantage of 10 Falcon turnovers to build a double-digit lead in the contest’s opening eight minutes. Yet the Falcons were able to quickly adjust, outscoring Berthoud 12-4 in the second period and 32-23 in the second half to secure their first Tri-Valley Conference win of the season.

For Berthoud Head Coach Anthony Urrutia, the hot-start, cold-finish nature of the game could be explained in the simplest of terms − Berthoud’s inability to make shots.

“We just didn’t knock down shots. And then we didn’t take care of the ball,” Urrutia explained. “We do a bad job when teams are in zone, and we’re not getting pressured, of getting lackadaisical with the ball.”

After making three of its final five field-goal attempts in the first quarter, Berthoud went cold from the floor. The Spartans made only one bucket, on just five attempts, in the second period and shot under 30 percent, 5-for-18, in the second half. Moreover, Berthoud shot just 67 percent from the foul line, well below Urrutia’s stated target of 80 percent free-throw shooting.

“We just need to start knocking down shots, we’re just not a good shooting team right now,” Barron explained after the game. “We’re getting inside and driving, but eventually they start stopping that and we try to take shots outside, start forcing stuff, and it ends up not working.”

Skyline senior Seth Green and freshman Braden Blick drained shots from downtown on back-to-back possessions as part of an 8-1 scoring run that cut Berthoud’s seemingly comfortable 10-point lead to just three, 14-11, with 4:41 remaining in the opening half.

Berthoud was able to retain a narrow lead, 17-15, as the teams adjourned to the locker rooms at halftime and emerged from the intermission hot. Senior point guard Nate Hammel, who led Berthoud with 18 points, drained a three, and freshman Cally Castles added a pair of buckets as the home team pushed its lead to 24-17 just three minutes into the second half.

Yet, just as they had done in the second quarter, Skyline quickly struck back, assembling a 9-0 run to take a 28-24 lead with 1:02 left in the third.

The Falcons were able to scratch and claw their way to a two-point lead, 28-26, at the end of the third period but then ran away with the game in the fourth. Skyline pushed their lead to eight 37-29 with just four minutes remaining as Berthoud missed its first seven shots from the floor.

“They started handling our pressure a little more and they just weren’t turning the ball over as much,” Said Barron about the Spartans’ shooting woes late in the game, “They got in that half-court defense, took their time and just broke us down and that killed us.”

With just 46 seconds remaining in the game, Berthoud made its first field goal of the period, courtesy of sophomore Josh Doyle. Just as he had done in the Spartans’ prior game against Erie, Doyle came off the bench after a timeout, slipped away from the defense and drained a trey from the corner to give Berthoud some late life.

Asked how he is able to stay sharp after watching the first 30-plus minutes of the game from the bench, Doyle explained, “I just try to keep my focus, get my shot down and get ready in case that opportunity happens.” The sophomore has not lost focus of the big picture, saying, “Yeah it feels good…but we need to get the win next time.”

Yet even with Doyle’s late-game trey, the Falcons were able to hang on for the win.

Despite 29 points from Hammel, Berthoud (4-8, 0-3) dropped its third-straight game Tuesday night, losing to Roosevelt 70-61. The Spartans look to right the ship tomorrow evening in Windsor against the TVC first place Wizards. Berthoud returns home on Jan. 20 for a matchup with Frederick.