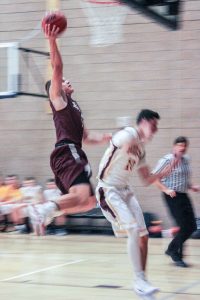 Berthoud’s Karsten Bump goes up for a shot during the Spartans game this past weekend.
Angie Purdy / The Surveyor

A journey of 1,000 miles begins with a single step.

The Berthoud High School (BHS) boys basketball team has not had a winning season in more than a decade. Yet Berthoud, under the leadership of second-year Head Coach Mike Burkett, may have taken that first big step in their rebuilding process by besting Tri-Valley Conference (TVC) foe Windsor 53-47 in the second game of the Vista Peak Bison Basketball Bash in Denver on Dec. 2. The win over the Wizards was sandwiched between losses to Thomas Jefferson, 35-25, two days prior and 55-40 to Glenwood Springs on Dec. 3.

“This is a huge win for our program. Windsor has been a top-notch program in this area for some time and to pull this one out tonight is a great building block for what we are trying to accomplish,” Burkett said after Berthoud’s defeat of the Wizards. “We got solid contributions from every player we put on the floor tonight. I could not be any prouder for these guys. They have worked hard and they deserve all the credit.”

In their two TVC meetups last season, Windsor won both games by a combined 161-91. But on Friday night Berthoud out-scored Windsor in three of the game’s four periods as junior guard Trinity Buckley scored 19 for the Spartans, a mark that included a 9-for-10 effort from the charity stripe, and sophomore Jake Lozinski added another 11. The win over a team that finished in a tie for first place in the TVC last year figures to provide a major confidence boost for the young Berthoud squad.

Even with Wyatt Stratmeyer’s 12 points, Berthoud struggled to get much else going offensively against Thomas Jefferson as the teams combined for only 22 first-half points. Jefferson got the 10-point win, 35-25 in the first game of the Bison Bash. In the Spartans final game of the tourney, Berthoud failed to eclipse double-digits in scoring in each of the first three periods before scoring 17 in the fourth in the 55-40 defeat to Glenwood.

Berthoud faced off with Green Mountain in a home tilt on Dec. 6, but ultimately came up short by a 50-35 final in a game where the teams battled with the officials as much as they did one another. The Spartans trailed by only four at the half but were out-scored 26-15 in second half. Buckley paced the Spartans with 15 points, but the 23 from Ram guard Alex Telles, which included 15 from downtown, were too much for Berthoud.

“I couldn’t be prouder [of] my guys tonight,” Burkett said. “We are young and learning how to compete. Now we just have to learn how to win. I know we got it in us and it’s coming.”

Berthoud (1-3) will look to recreate the results they earned in their win over Windsor this weekend when they host their annual namesake Spartan Classic at BHS. Berthoud will play Littleton and Skyview on Dec. 9 and 10, respectively.