Boys basketball starting from square one 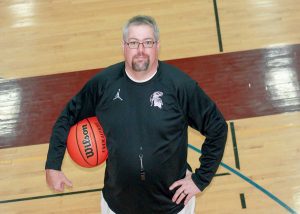 New Berthoud head boys basketball coach Mike Burkett is looking forward to surprising
some of the Tri-Valley competition this season with a core group of returning starters.
Angie Purdy / The Surveyor

In more ways than just the obvious, it is a long way from Anderson, Ind., to Berthoud, Colo. And there is perhaps no one more keenly aware of that than new Berthoud High School (BHS) boys basketball coach, Mike Burkett.

Burkett, who hails from an area of America where basketball is a way of life and high school teams measure their nightly game attendance in the thousands rather than the dozens, has taken over a Spartans basketball program that has a combined 2-26 record in Tri-Valley Conference (TVC) play the previous two seasons.

His approach will be straightforward.

“Basketball is not rocket science,” Burkett said. “You try to take the best shot you can get and you try to get them to take the worst shot they can get.”

The Hoosier State native has spent his time recently getting to know his players, their strengths and weaknesses, and devising ways to put them in the best possible position for success. Burkett says despite the team’s past struggles, he really likes what he has seen.

“There’s a lot of things I like; these kids don’t know how good they can be. One thing we emphasize is that if you can change your thinking, one more score per quarter or one stop per quarter, you can win that Tri Valley championship,” Burkett explained, adding that his players have responded well to the college-like approach he employs. “Their fundamentals are very good, they’re great kids and they’re very coachable.”

Burkett runs his practices like they do in Indiana – at a torrid pace and with state championship game-like intensity – and the team has responded well. It is this change in culture that Burkett says is his biggest challenge. But it’s a challenge, not an obstacle.

The Spartans return most of their core group of players from last season, with the notable exception of their point guard and primary ball handler Nate Hammel who, despite leading the team in scoring average, also led it in turnovers.

One area Berthoud is blessed from a basketball perspective this season is better size than they’ve had in recent years, with four players on the varsity roster – Cody Braesch, McCallan Castles, Noah Purdy and Jade Ream – measuring in at six-foot-three or taller.

“Size is great, if you’ve got big kids that always helps,” Burkett said, but quickly clarified height is not the be-all, end-all of the sport that many make it out to be and outlined how he has seen, coached and played on teams that enjoyed great success with few, if any, six-plus footers.

Burkett made mention of a pair of his taller players, the six-foot five-inch Castles, just a sophomore, and Purdy, a six-foot three-inch junior who flashed some impressive ability in his nine games last season.

“[Castles] can play a little bit,” Burkett said. “Even though he’s our tallest player he’s also probably one of our better outside shooters.” As a freshman in the 2014-15 season Castles led Berthoud with 20 three-pointers while also pulling down a team-high 121 rebounds, and Burkett said he expects even better production this year.

“And Noah Purdy can play a little bit,” Burkett said. “He can play five feet from the basket but he can hit those 15- or 16-footers too,”

Something Burkett said he emphasized in the week-and-a-half of preseason practices the Spartans have had is that players will not be pigeon-holed into specific roles.

“Basketball is always evolving. Look at the [Golden State] Warriors, they’re reinventing the way you play the game,” Burkett said, describing how the still-undefeated and reigning NBA champions play an almost position-less style of basketball.

“It doesn’t matter if you’re the one, if you’re the two, if you’re the three, what’s important is knowing what you can do and how that impacts the team,” Burkett said. “I want to get kids who can play this way, I don’t need someone to be a three or a four, we need to be multi-faceted and do the things we can.”

The Spartans begin their season with a six-pack – where “C” team, junior varsity and varsity for both boys and girls teams play in a single night – on Dec. 1 against Weld Central at BHS. The annual Spartan Classic, also co-hosted by both the boys and girls teams, takes place Dec. 9, 11 and 12.

Burkett was apprehensive to get into what he expects in his first season as the Spartans head man.

“We haven’t emphasized what record we want, we want to win possession to possession,” he said.

He explained the change in culture he intends to implement will take time but also added, “The pieces are there to be competitive, these guys have picked it up quick and I think we can surprise some people this year.”