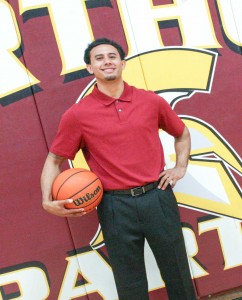 First-year head coach Anthony Urrutia takes over for Pete Sheck who resigned
as the BHS boys basketball coach after being promoted to athletic director this
year.
Angie Purdy / The Surveyor

There is a beginning to everything. In taking the reins of a Berthoud High School boys’ basketball team that has won a combined three conference games the last two seasons, newly-minted head coach Anthony Urrutia says his team will start at the beginning with the fundamentals.

Urrutia emphasizes the basics – play stout defense, minimize turnovers, avoid making mental errors – and the other, flashier parts of the game will follow.

“Our motto is going to be play defense, rebound and take care of it,” Urrutia said.

In interview with Urrutia and his players, it became clear that defense will be a central focus for Berthoud. It is the logical place to start for a team that gave up 847 points in conference games last season; the second highest mark in the Tri-Valley Conference (TVC). The Spartans believe that by limiting second chances for their opponents to score, and not hurting themselves on offense, they can control the flow of the game and put themselves in a position to win games by keeping the score close.

“Defense wins games,” said junior forward and center Cody Braesch. “And strong defense is going to be our focus this year.”

While the Spartans have spent the lion’s share of their time in preseason practices focusing on defense, which Urrutia explained requires developing the right mentality as much as it does honing physical skills, they are now beginning to install portions of their new offense.

Yet the offensive side of things will require work in live games, as was explained by senior point guard Nate Hammel.

“I think the offensive game will exponentially improve as we get into some live games,” Hammel said.

Hammel, who was Berthoud’s leading scorer last season with an 11.5 points per game average, contends that the countless hours of work in the offseason that he and many of his teammates put in is already showing up on the floor.

Taking over as a new head coach is always a challenge, yet the players have responded well to Urrutia, who they say did not come in with a one-size-fits-all approach.

“He got to know each of us and our strengths and weaknesses and then he went from there,” said Braesch. “The things he’s putting in are working pretty well.”

Having finished the 2013-14 season tied for last place in the TVC with a 1-13 record in league play, the Spartans know they have a long way to go but contend this is a new season and a changed team. Internal expectations for the team are high; Urrutia, and his players, say the season will only be deemed a success if and when the Spartans make the postseason.

“I expect us to be competing for a spot in the state tournament,” said Urrutia. “Every team’s goal should be to win a state championship, but we have to be realistic about things and set the bar at a point we can attain, but right now, if we don’t make the state tournament we won’t be pleased with the job we’ve done.”

Berthoud lost five seniors, all of whom played significant minutes, to graduation, and this year will field a squad that brings a blend of youth and experience. In addition to Braesch and Hammel, the Spartans return senior Tyler Pechin and juniors Steele Castles, Jade Ream and Patrick Barron, each of whom saw action on the varsity squad last season.

Asked what can be expected from his squad this season, Urrutia replied, “No one is going to play harder than us, we’re not going to get out-played, and we’re going to play defense.”

The Spartans begin their season Dec. 1 with a trip down to Keenesburg to take on the Weld Central Rebels. Berthoud’s home opener is on Dec. 10 against Greeley Central in what will be the first of three games in the annual Spartan Classic.