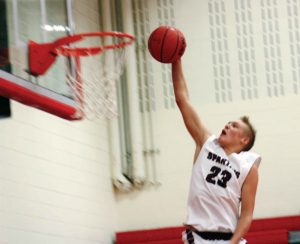 Photo by Angie Purdy
Berthoud’s McCallan Castles goes up for a shot against Dawson School at the Skyline Tournament on Dec. 3.

After beginning the season with their first four games on the road, and compiling an even 2-2 record, the Berthoud High School boys’ basketball team should be eager to play some games on its home hardwood.

After besting the Weld Central Rebels 49-40 in Keenesburg Dec. 1, the Spartans won going away, 76-41 over the Dawson School, in the opening game of the Falcon Challenge at Skyline in Longmont last week. Unfortunately, from Berthoud’s perspective, the team dropped their final two games of the tournament. Berthoud lost 50-28 to Pueblo East on Friday and then fell 51-45 to Denver Science & Tech on Saturday.

The Spartans got 23 points from both Nate Hammel and Jade Ream in the Dawson drubbing. Ream, who played in just nine games as a varsity reserve last year for Berthoud, has broken out with 34 points and 12 rebounds for the Spartans in the early throes of the season.

Berthoud jumped to an early lead over Dawson, holding the Mustangs to just 10 points in the first half while hanging 21 on the board themselves. The Spartans put the game out of reach in the third period, out-scoring the Mustangs 24-17 and taking a commanding 63-27 lead. Freshman McCallan Castles, the Spartans’ second-leading scorer on the season with a 9.3 PPG average, tallied 13 points and a team-high eight rebounds in the victory.

The Spartans found themselves on the other end of the chute in their next contest. The Pueblo East Eagles took it to the Spartans, winning the game 50-28 and holding Berthoud to single-digit points in all four periods. Castles led the Spartans in both scoring and rebounding, with 10 points and eight boards.

In their final game of the Skyline Challenge, the Spartans battled but ultimately came up short, losing 51-45 to the Denver Science & Tech Stapleton Knights. The final score could have been a lot more lopsided, however, as the Spartans scored 21 points in the fourth period to rally from a 39-24 deficit at the end of the third.

The Knights shot 4-for-11 from beyond the arc, hardly an impressive number but those 12 points were more than enough to secure a margin of victory against a Berthoud squad that was 0-for-14 from 3-point range and shot a paltry 31-percent overall on the night.

Through four games, the Spartans find themselves at 2-2 with four games to go before Christmas break. Hammel (15.0), Castles (9.3), Ream (8.5) and Cody Braesch (7.8) lead Berthoud in scoring average in the very early part of the season. Castles (23) and Braesch (21) are the team’s top two in rebounding while Hammel in first on the squad with 19 assists.

Berthoud kicked off the annual Spartan Classic at BHS last night in a game against Greeley Central. The Spartans will play Littleton Friday night at 8 p.m. before closing out the tournament Saturday afternoon against Lutheran. Tipoff is scheduled for 2:30 p.m.