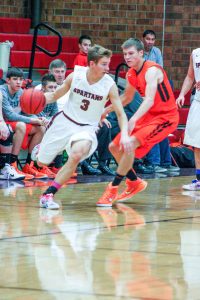 Berthoud’s Tyler Pechin makes a move
against an Erie defender on Tuesday
at Berthoud High School. Despite a
valiant effort, the Spartans lost 57-56.
Angie Purdy / The Surveyor

No one really knows why, but for some reason, the closer a game the more thrilling the outcome for the victor and more agonizing it is for the defeated.

In each team’s Tri-Valley Conference (TVC) season-opener, the Berthoud Spartans and Erie Tigers played in precisely one of those games. It was one for the ages, but one that ultimately ended in overtime, 57-56 in Erie’s favor, on Tuesday night at Berthoud High School (BHS).

It was a game that lacked a discernable flow, and just about everything that can happen in 36 minutes of basketball happened. However, the one aspect of the game that was entirely static was the full-force effort put forth by every player, on both teams, for every second they were on the floor.

In both the fourth period and in overtime, Berthoud possessed the ball with an opportunity to win the game, but both times came up short by the slimmest of possible margins that allowed Erie to take the game to overtime and eventually win it.

Despite being understandably disappointed with the final outcome of the game, Berthoud Head Coach Anthony Urrutia was highly pleased with the strides his team has made in its last few games.

“It’s starting to click for us now,” Urrutia said. “We’re still going through some growing pains, but what I’m really proud of is our guys really battled tonight.” 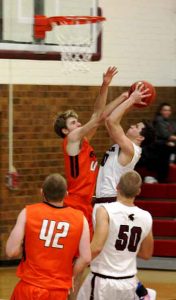 Berthoud’s Nathan Hammel goes up for a shot at Tuesday’s conference opener at Berthoud High School.
Angie Purdy / The Surveyor

The visiting Tigers appeared to take control of the game in the second half, out-scoring Berthoud 15-7 in the third period to transform a four-point halftime deficit into a four-point lead entering the final eight minutes of regulation. Erie was able to push its lead as high as seven, 44-37, with just 3:44 remaining in the game.

Berthoud was able to take advantage of Erie’s zone defense by playing patiently. Keeping the ball in the hands of point guard Nate Hammel at the top of the key, the Spartans were able to draw out and spread out the Tigers’ zone, allowing Hammel the opportunity to drive and dish or drive and shoot.

“We knew if we can get them extended, just hold the ball up there towards the top, they would come out there and guard, which extends their zone, which opens up the lanes for us to drive and attack,” Urrutia said.

The approach worked, as did late-game defensive and offensive substitutions using Jamie Gray for offense and Jake Yuska for defense, as Berthoud battled back. A four-for-four effort from the foul line by Hammel and a three-pointer from freshman Cally Castles, with just 24 seconds remaining, gave Berthoud a one-point lead. Yet Erie’s Triston Berringer made good on one of two free-throws to tie the game at 47. A last-second, literally, shot from Castles, rimmed out of the bucket and sent the game to overtime.

In overtime, another trey from Castles put Berthoud ahead briefly, 50-49, with just 2:12 left in the four-minute period. Erie pushed back, however, jumping ahead 54-50 with under a minute remaining. It was a lead they would not relinquish despite the Spartans’ best efforts.

After the teams traded some free-throws and timeouts, Berthoud sophomore Josh Doyle drained a three-pointer from the corner to cut Erie’s lead to just one, 57-56, with under 20 seconds remaining. The Spartans did get a final chance to score the game-winning bucket, but the shot bounced out and Erie center Cameron McCurry grabbed the rebound to the secure the win for the Tigers.

“We just didn’t knock down enough shots,” Urrutia said after the game. “We got the looks we wanted, but we just didn’t convert.”

Urrutia added that his team learned a lot in its last two games.

“We know what kind of effort we have to have, and we’ve put it together in back-to-back games, and I’m really proud of them for it.”