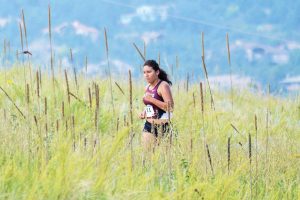 “Win the race where you are,” was the mantra of the day for the Berthoud High School cross country runners competing at the Cheyenne Mountain Stampede at the Norris-Penrose Event Center in Colorado Springs on Aug. 26. The quote reminds athletes that only one person can be the winner of the entire race, but each person can compete with others of similar ability. The key is to do their very best possible; every single race, all the way to the finish line.

Last Friday the Berthoud Spartans runners traveled to Colorado Springs to race on the course that will host the state meet in October. The Spartans hope to qualify both a girls and a boys team to the state meet. Cross country has been reclassified into 3A competition this year, but that does not make the competition any easier, as other powerhouse schools like Holy Family were also reclassified to 3A. Berthoud moves into a region with boys-state runner-up Frontier Academy and top-10 state-placing girls teams of Eaton and Frontier Academy.

Liz Bosnich was the first Spartans athlete to race Friday. The race strategy for all the Spartans was to start out conservatively and then pass people throughout the course. Bosnich was in the middle of the pack in the girls open race in the beginning. The junior passed one runner after another until she had moved to fourth place with a time of 25 minutes, 44 seconds over the 5K distance. 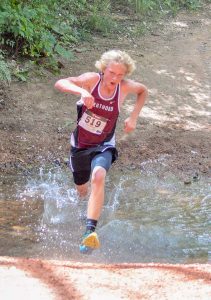 Freshman Bryce Mitts and sophomore Samuel Hatton finished one and two in the boys novice race. Eric Godfrey, Dylan Carder and Tucker Horsch all placed in the top eight of that race as well. Kimberly Blough and Lela Urbain finished second and fourth in the girls novice race. All of the athletes moved up throughout the race, passing other runners who had started out too fast.

In the varsity races the Berthoud girls finished eighth and the boys finished 10th. Maycee White was Berthoud’s first girl, in 23rd with a time of 22:42. Alyssa Radloff stayed with White for much of the time until stomach issues late in the race caused her to lose time, finishing in 37th place with a time of 23:43. Freshman Alex Schultz was 52nd in her first cross country race in 24:40. Kathryn Mathiesen was 66th in 25:39 and Julianne Evans Dennison was 90th in 28:34.

The cross country team travels to Denver to race at Washington Park on Sept. 1. The race starts at 3 p.m.