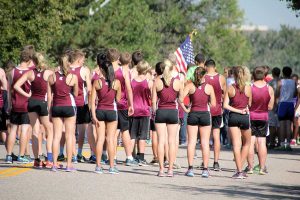 Berthoud Spartans paused to pay tribute to those involved in the events on 9-11-2001 before the start of the Liberty Bell Invitational. The boys team placed second and 18 Spartans set personal records at the meet.
Photos courtesy of John Marquardt

The Liberty Bell Cross Country Invitational occurred on Sept. 11 this year; a fitting title for a day of remembrance. A group of students from Heritage High School stood at the starting line and sang the national anthem before the start of the meet billed as “the fastest meet of the season” by many. Ninety-two teams attended the meet which was separated into four divisions. Berthoud was in the first division to race over the 5K course.

Berthoud’s Elijah Grewal took his normal position of fifth place going through the first mile, as he has for three of the past four races. Ken Kubik had a great start getting out of the congestion of runners, running beside Grewal for the beginning of the race. The two ran close to one another until Grewal gained some ground up a hill near the mile mark. Josh Doyle, Kade Leonard, Murphy Vogele-Zimmerling and Zac Marquardt were within seconds of each other through the first mile. Noah Burtis and Ty Williams split the gap between the group ahead of them and another group of Berthoud runners; including William Payne, Collin Pea and Kevin Sethre behind. In cross country it is advantageous to run with teammates for part of the race to push one another.

During the second mile of the race, the Berthoud High School harriers started to separate; some gained places, others lost places. Coming into the finish chute, Grewal had made up most of the distance on Holy Family’s Kyle McCabe and Platte Canyon’s Dylan Parker. But the BHS senior just missed catching them and finished in fifth place with a personal-best time of 17 minutes, 14 seconds. McCabe finished at 17:12 while Parker was given the same time as Grewal, but the finish judge said he had out-leaned Grewal. Kubik came through the line in 17:56, good for 13th place.

Doyle continued his modus operandi of passing people in the last mile and finished in 21st place with a time of 18:20. Kade Leonard ran a personal-best time of 18:34, finishing in 27th place. Murphy Vogele-Zimmerling placed 39th with a time of 18:52 and Zac Marquardt was 50th place in 19:12. 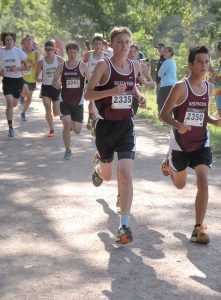 The Spartans have been working on sprinting at the finish of a race. Most of the BHS runners passed at least one athlete from other schools in the last 100 meters of the race. Rowan Carr and Kjell Gjelde-Bennett moved up at least five places each on the final sprint.

Picking up those extra places at the finish enabled the Spartans to finish in second place out of 20 in the team competition. Holy Family was first with 53 points to Berthoud’s 104. Moffat County was third with 137 points.

“I know the fans watching the end of the race are looking for a show. I thought I would give them one,” stated Eric Rennaker, who sprinted past a number of opponents in the final 100 meters.

The girls started their race three minutes behind the boys. Sonya Schuppan raced through the mile with a time of 7:12. Maycee White had Schuppan in her sights through much of the first mile until the senior accelerated on the hill leading to the first-mile mark. Schuppan would later extend her lead to finish 42nd place in 22:48. White was 58th in 23:49. Kathryn Mathiesen showed her finishing kick passing girls on the final hill. finishing in 66th place with a time of 24:36. Cailey Archer and Alyssa Radloff were close to one another at the mile. The freshman, Archer, continued to improve on her times over the 5K distance with a 93rd place in 26:20. Radloff placed 108th.

In all, it was a day of accomplishment as 18 Spartans set personal-best times on the course. The team will concentrate on training for the Loveland Sweetheart race on Sept. 25 at 4 p.m.